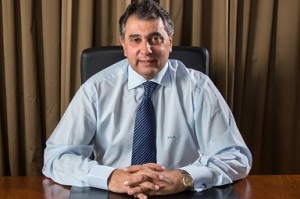 Mr Vassilis Korkidis is one of the most important representatives of the Greek commercial sector. Having a long-lasting personal experience in leading his family business company, which trades electrical and marine equipment, he currently concentrates on a different, perhaps more difficult mission. Acting as President of the National Confederation of Hellenic Commerce and the Piraeus Chamber of Commerce and Industry he attempts to substantially contribute to the revitalization of the Greek commercial sector as well as of small and medium size enterprises with the current environment of the economic crisis.

For Mr Korkidis, the deepening of Sino-Greek relations is a particularly positive development. As he said in an interview with chinaandgreece, ‘2014 is the year of China in Greece and the year of Greece in China’. Various official visits confirm the good climate of co-operation between Athens and Beijing which has entered an ‘exceptional phase of common understanding’. According to Mr. Korkidis, ‘mutual respect between peoples of the two countries can be the guarantee and the springboard for the improvement of the bilateral relationship in the future’.

As far as the national economy of Greece is concerned, Mr Korkidis believes that Chinese investments will have double benefits. On the one hand, they practically demonstrate Beijing’s will to support the country and highlight its belief that the worst part of the Greek crisis belongs to the past. On the other hand, Chinese investments will boost employment in Greece, offer new jobs and support growth.