The Athenian Brewery approaches the markets of China and Italy 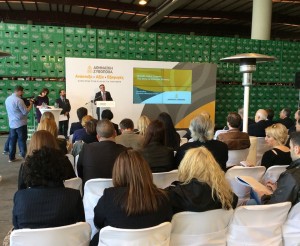 Athenian Brewery embarks on a new export-orienting strategy by exporting Heineken beer to China and Italy. This was officially announced during a special event organised in its premises on 2 April 2015. In particular, the company has reached an agreement for the production of 160.000 hectoliters from its unit based in Patras. The investment made in the relevant factory was worth of 2 million euros.

According to the administration of the Athenian Brewery, the new policy will create benefits for both the company and Greece. That is because it will create new job positions at the local level, will boost the added value of the production chain and will boost Greece’e commercial relations with China and Italy. The volume of exports of the Athenian Brewery is expected to exceed 400,000 hectoliters in 2015. This upward trend is due to the dynamic and growing portfolio of the company including brands such as Heineken, Amstel, ALFA, Fischer, natural mineral water IOLI and innovative products based on malt, intended exclusively for exetrnal markets external such as Fayrouz.

It is worth-mentioning that since the beginning of the crisis the value of exports of the Athenian Brewery has reached 122 million euros. As the company’s CEO Zooulis Mina puts it: ‘We have worked hard to bring to Greece the production of Heineken for China and Italy. Our success is due to our long-term strategy, our high production capacity, and our people’s undeniable skills as well as to our top quality products at competitive cost. This constitutes an important step for our sustainable growth in the future’.