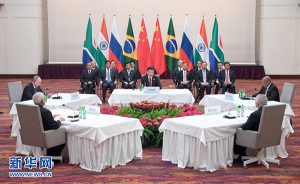 One year after the G20 Hangzhou summit and four months after the Beijing Belt and Road Forum for International Cooperation, another Chinese city – Xiamen – hosted an equally important international meeting.

As China has the BRICS presidency this year, the southern city known as “the Garden of the Sea” hosted the 9th annual summit of the five-member group. To mark the occasion, the Ministry of Commerce has published data which clearly show the importance of BRICS for the world economy.

For example, the bloc presently contributes 52 percent of global economic growth, while its share of global GDP is 23 percent. Both percentages mark a significant rise in comparison to its founding 10 years ago.

The 9th BRICS annual summit does not take place under normal economic conditions, though. Donald Trump’s presidency has caused serious concerns about the future of globalization. The beginning of a new era of protectionism, where trade war scenarios have gained some ground, is having a discernible impact on the world economy.

Although China avoids using the word “leadership,” preferring to stick to “responsibility,” its role is critical in protecting the globalization cause and paving the way for its transformation.

At the opening ceremony of the BRICS Business Forum on Sunday, President Xi Jinping reiterated his country’s fundamental position – clearly presented in the Davos World Economic Forum last January – and also pressed for more cooperation in order for emerging countries to be fairly rewarded for their contribution to the world economy.

Although “economic globalization is facing uncertainties and emerging markets and developing countries find themselves in a more complex external environment,” Xi seemed determined to succeed. China’s progress in the last decade shows the way forward.

According to World Bank statistics, China has the larger population among BRICS countries amounting at 1.38 billion people with India following with a population of 1.32 billion citizens. Furthermore, China’s GDP stood at $11.20 trillion in 2016, leaving India a distant second on $2.11 billion.

As far as trade is concerned, the country last year had a surplus with India and Russia but a current account deficit with Brazil and South Africa. Specifically, data from the General Administration of Customs of China show that the 2016 trade volume with India was $69.6 billion, and with Russia $69.5 billion, followed by Brazil $67.7 billion and South Africa $35.3 billion.

In parallel with the numbers, there are two important reasons why China attributes importance to the Xiamen summit and to its sentiment of responsibility. The first is that the Belt and Road Initiative is now an established platform for boosting interconnectivity, which does not only follow the traces of the ancient Silk Road but has the potential of transcending the historical limits.

In May, President Xi presented his vision to bring the world’s continents closer together through the Belt and Road Initiative without giving any geographical specifications. Latin America, for instance, might equally benefit in the future.

The Belt and Road Initiative nowadays is also directly linked to the flourishing debate over limitations on free trade in Trump era in offsetting a large part of the negative impact of reverse globalization.

The second reason for China’s optimism is that it is slowly but steadily elaborating on new plans for the development of BRICS in the future. President Xi intends to put his country’s stamp on the opening of “a new golden decade” for the bloc, as he underlined in Xiamen.

Several ideas were discussed. For example, cooperation between the BRICS New Development Bank and various national banks is expanding. Further to this, some regional organizations, such as the South American trading bloc Mercosur, are in Xiamen.

More importantly, the so-called “BRICS-plus” modality could become a tangible reality in the medium-term seeing the group enlarging for the first time in its brief history.

Last but not least, although BRICS does not constitute a political or military alliance but is rather synthesized around economics and trade, the more collaboration is strengthened, the more likely interdependence can be forged.

This might be a presupposition for peace and stability according to Xi’s vision. China and India, which have been historically and also recently been involved in serious political disagreements have more to gain than to lose by being partners in the nexus of emerging economies and setting common goals for the future.

Subsequently, economic globalization will be the springboard for growth and prosperity, perhaps cultivating the will for some cooperation in political affairs. This will be the new type of international relations to emerge where “win-win” results could be yielded.

And that is why President Xi put in Xiamen security issues on the agenda – such as the fight against terror – on the basis of multilateralism.