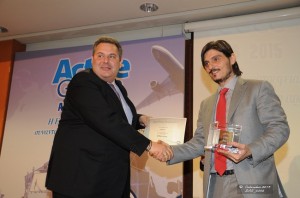 The largest Greek pharmaceutical company, VIANEX SA, was recognised as a ‘champion’ for its outward-looking export strategies. On Thursday 12 March 2015, the company was the recipient of an award at the ‘ACTIVE GREECE AWARDS 2015’ event, in recognition of its role as one of the most important entrepreneurial forces in the country bringing great respect and esteem for Greece abroad. The event, organized by ACTIVE BUSINESS PUBLISHING, was held at the Piraeus Port Authority Reception Hall, in the presence of leading representatives of the political leadership and the business world.

The Business Excellence Award was awarded to VIANEX SA for its performance in the export sector. The award itself was presented by the Minister of National Defence, Mr   Panos Kammenos, to the Executive Vice-President of the Board of Directors and Deputy CEO of the company, Mr  Dimitris Giannakopoulos.

Mr  Giannakopoulos, having expressed his warm thanks to the Minister, had this to say:

‘On behalf of the Giannakopoulos family and the 1,200 employees of largest pharmaceutical company in Greece, VIANEX, I thank you for this honor.

We are here today because, for more than 90 years now, we have conscientiously placed all the resources at our disposal in service of the health of the Greek people, providing high-quality and safe pharmaceutical products. We are here today because VIANEX, and the Greek pharmaceutical industry as a whole, flies the Greek flag high in more than 80 countries to which we export Greek pharmaceuticals. We have declared ourselves present on this new day for the country, which is struggling to break free from the shackles of its lenders and achieve real development, with a new government that has been given a clear mandate to turn the page.It is imperative that we leave behind the Greece of the Memoranda and of anti-development policies. Policies have had a detrimental effect on Greek pharmaceutical production, deregulating the market and limiting pharmaceutical expenditure, increasing only already heavy taxation, rebates and clawbacks. 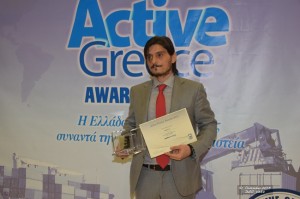 Restoring the proper functioning of the domestic market is a necessary precondition to the strengthening of export activity by Greek pharmaceutical companies, allowing them to achieve even better performance results. Correcting the destructive policies of the past does not mean merely removing the measures of the Memoranda, but also courageous initiatives by the new government. In an egalitarian state, the perpetuation of special tax arrangements and other privileges for certain categories of business is unacceptable, particularly when others continue to be openly strangled…What is required, then, are courageous political decisions without footnotes or small print. What we are asking is for the new government to proceed with the reconstruction of the productive capacity of this country. For the true development of the country. For the health of the Greek people.

For VIANEX and family Giannakopoulos the only flag there is, and the one we strive daily to keep flying all over the planet, is the Greek flag.’

It is worth noting that in 2014, VIANEX exported 2 million units of the injectable antibiotic vancomycin to the Chinese market. This product is manufactured at the company’s Plant C. The strategic agreement concluded by VIANEX with Eli Lilly-PHARMASERVE LILLY in 2013 foresees increased production quantities and exports of the formula in the coming years (more than 6 million units in 2016, with a continuous upward trend). The arrival of the first batch of vancomycin in China was hailed as the event marking the beginning of a new era for the country and the Greek pharmaceutical industry, both by the political leadership and major market players.