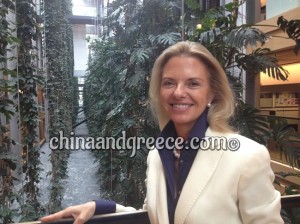 New Democracy MEP and Substitute in the Delegation for EU relations with China Ms Elissavet Vozemberg spoke on chinaandgreece on the sidelines of the recent session of the European Parliament in Strasbourg. Ms Vozemberg believes that the current relationship between Greece and China is strong and continuously growing. In her view, ‘the current Greek government has worked hard to attract investments from China’ and ‘that kind of initiatives can contribute towards growth’. Ms Vozemberg is very optimistic because ‘China has liquidity as well as a specific plan to invest in a wonderful country like Greece’.

As she explains, ‘co-operation can be expanded either at the level of private initiatives or at that of official contacts between states’. Being a member in the Delegation for EU relations with China, she will closely approach the mentality and way of thinking of Chinese people. The Greek MEP also largely focuses on the possibility of an increase of arrivals of Chinese tourists in Greece.

As far as relations between the EU and China are concerned, Ms Vozemberg does not ignore the current political debate at the European level ‘in the context of the attempt of Brussels to become internationally stronger’. She believes that Europe needs more time to equally negotiate with superpowers. In spite of obstacles, however, she will strongly support the process of the improvement of Sino-European relations.