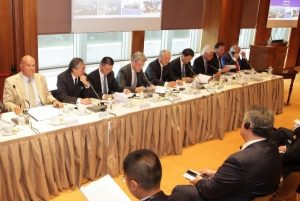 The Annual General Assembly of the Piraeus Port Authority (PPA SA) shareholders took place on Wednesday, June 28th 2017 with a quorum of 85, 56% and main issues the Approval of the Annual Financial Statements and the Dividend Distribution for the financial year 2016 which, as the Board of Directors proposed, amounts to € 0.0892 per share. As the Chairman of PPA SA Mr. WAN Min noted during the presentation of the results: ‘The year 2016 it is definitely a milestone for PPA SA as 51% of its shares transferred to COSCO Shipping Group. The turnover amounted to € 103.5 million showing an increase of 3.6%, the earnings before taxes amounted to € 11.0 million and the net result is improved in almost all of the Company’s operations despite the negative economic environment’.

As the CEO of PPA SA Capt. Fu stated: ‘In 2016, the new PPA Management ensured the smooth transition and reorganization of the Company, preparing the implementation of the Investment Plan. The 2017 is the first year of building and developing the new PPA’.