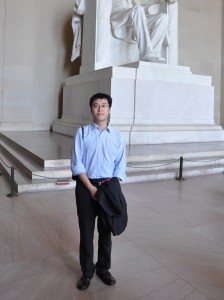 The rise of China is an issue of critical importance for international relations. Relations between Beijing and Washington, tensions in South China Sea and other regions of the world such as the Middle East cannot but attract the attention of scholars and analysts. Although the main objective of chinaandgreece.com is to monitor Sino-European relations, the website does not turn a blind eye to critical world developments. In that regard, it approaches scholars and analysts who can offer their insights. One of them is Dr Qi Hao from the Chinese Academy of Social Sciences*. Dr Hao elaborates on Sino-American relations, discusses the role of China in the Middle East and analyses China’s ‘One Belt One Road’ (OBOR).

How do you assess the future of relations between the US and China?

I want here to quote China’s foreign minister Wang Yi, who just visited Washington D.C., describing China-U.S. relations as complex and multiple. It’s an indifferent but vague description of this bilateral tie, compared with the New Type of Great Power Relations. With the new saying, China leaders may have recognised that competition and even some occasional conflicts may be inevitable, in view of the looming confrontation in South China Sea. Meanwhile, however, the Chinese leaders still aspire for a stable relationship with the US continuing its communication with the US within the existing institutional framework and to expand new areas for cooperation, such as on climate change.

But as China grows, a new equilibrium must be reached between US and China, not necessarily on military power, but with more space for China to voice its requirements and concerns as a rising power. Before that, China and the US may interact in ways that seems provocative and assertive, which underlines the importance of a smooth mechanism for risk control. The prospect of the relations depends upon both leaders reevaluating their vital interests and effective means for the ends, especially for the US to have a rational understanding of the problems revolving the Xi’s reform within China and the reasonableness of some China’s foreign policy options.

Is China able to replace the US mediation role in the Middle East?

It seems after President Xi took the office, China has shown more interest to play a mediation role in the Middle East. China helped US and Iran successfully negotiate the nuclear issue, which is appreciated by both US and Iran. Besides this, China even tried to mediate peace talks between Israel and Palestine. But China is more cautious on other issues like the spring up of ISIS in Syria and Iraq, which also triggers a debate within China whether to get involved militarily in countering terrorism. Considered irrational by some Chinese scholars and experts on the Middle East, China’s intention to share a burden to attack terrorists is not put into effect, for compared both with US and Russia, China is not capable of affecting the situation in Middle East, both in terms of military and intelligence. Therefore, it’s inconceivable that in the near future China would be ready to take the role of US. Or the U.S. may also review its Middle East policy and get away gradually.

Would the US (especially under a Republican President) be prepared to come to deals which accommodate both its national’s interests and China’s rise?

Next US president, no matter Democrat or Republican, is predicted to take more tough policy against China, at least at the first beginning of its first term. China’s rise is an abstract picture that might be materialised by the US in specific areas, like the military deployment in South China Sea, the AIIB, and the “OBOR” in progress. There is no clear sign that US would resign any part of its supreme position to China, instead U.S. is treating China as its main adversary in Asia, just like treating Russia in East Europe. But as long as US are reluctant to wage a war against China, no matter all-out or limited, the two countries have to strike a big deal on how to handle the flashpoints in the relationship, like the tensions in South China Sea and potential risk across Taiwan strait.

-Is ‘OBOR’ a pure economic strategy or does it also contain elements of political interests?

The OBOR is firstly driven by the desire to output excess industrial capacity, aiming to revitalise China’s economy under the pressure of economic restructure. But against the background of China’s rise, even economic strategy would be interpreted as political ambitions for it has been argued by outside world that China could use economic clout to realize its political and strategic targets. On the other way, it has been proved by truth that the OBOR would not fare well without political insight to deal with the countries along the belt and road. The two factors above decide that the OBOR plan cannot be deprived of political consideration.

*Dr Qi Hao is an assistant research fellow at the Institute of American Studies, Chinese Academy of Social Sciences. He also served as the deputy director of Asia-Pacific security center at the Institute of International Relations, Tsinghua University. He obtained his PhD in 2011 from the Department of International Relations, Tsinghua University. His study interests include American presidential election, U.S.-China relations, American Southeast Asian policy and China’s territorial disputes with its neighbors.