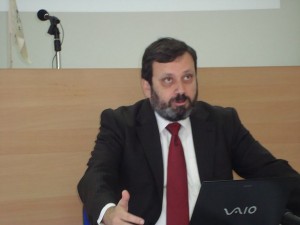 The challenge of piracy is of utmost significance for maritime security. In its interest to analyse this issue chinaandgreece.com approached Nikitas Nikitakos, who is  Professor at the Department of Shipping, Trade and Transport of the University of the Aegean and a visiting scholar at the Shangai Maritime University. Professor Nikitakos focuses on the activity of pirates, discusses the responsibility of China in combating piracy and also comments on the recent privatisation of the Piraeus Port Authority.

Piracy is one of the most important threats for maritime security. How do you assess the problem in these days?

The basic difference between the two regions is the mondus operandi. In the region of Western Africa, the pirates kidnap the crew or the passengers and then they ask for ransoms for the emancipation of the hostages. In the region of Southeast Asia, the pirates steal the merchandise and the fuels of the trade ships and they resell in the black market.

In the region of Western Africa, the confrontation of the pirates from the shipowners enterprises is accomplished with the usage of private guardians without the presence of states or international institutions.

Τhe confrontation of the piracy, especially in the region of Southeast Asia is a significantly difficult task, because the maritime passages are too narrow and the tactics of the pirates is flexible.

On the contrary, in the Malacca straits, where the problem is bigger, there is a presence of the International Maritime Organisation and the usage of the surveillance’s systems like the project of Marine Electronic Highway.

The role of China in the preservation of the maritime security is very important. The preservation of maritime security constitutes one critical component in the promotion of the China’s initiative “One Belt, one Road”. The initiative constitutes the opening of trade routes that connects China with the whole Eurasia region, either via land (via the Cis), either by the maritime trade routes of the Southeast Asia. Concerning the maritime trade routes, which is the most critical, the frictions between China and the states of Southeast Asia created obstacles in the Beijing concerning the accomplishment of the initiative.

These states often create obstacles to Chinese trade and provoke usually diplomatic tensions. The maritime region of the Malacca straits constitutes a significantly critical zone for the energy supply of China and the frictions that are being created could easily turn to significant crises.

The investment of Cosco in Piraeus is very important for the Chinese strategy of the opening of trade routes to Europe. If this element is combined with the conversion of Suez canal in a double direction canal, the Eastern Mediterranean is a region of specific interest for the Chinese authorities. Furthermore China is interested for other ports of Eastern Mediterranean, that can be the main entrances of transportation of Chinese wares to European market.