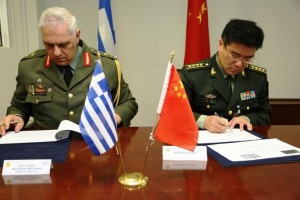 The Military Cooperation Programme (MCP) between Greece and China, was signed on Tuesday 15 March 2016, at Headquarters of the Hellenic National Defence General Staff (HNDGS). The MCP was signed by the Director of HNDGS International Relations Directorate, Brigadier Miltiadis Gryllakis and China’s Defence Attache in Athens Han Xiao. It includes a number of actions on individual and operational training. As military editor Leonidas Blaveris writes, the MCP will be principally applicable by naval forces of Greece and China.