ROK election: Implications for China and the US 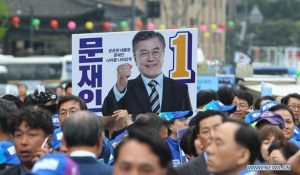 The presidential election of May 9 in South Korea has special importance. After months of political paralysis and massive protests due to former President Park Geun-hye’s alleged involvement in a corruption scandal and her subsequent impeachment, the country is finally in the process of filling the political vacuum. Acting President Hwang Kyo-ahn was politically weak – as a loyal aide to Park – while his duties were mainly administrative. Tasks for his successor will be difficult, including restoration of presidential dignity. Hwang himself expressed no interest in participating in the presidential race, leaving three main candidates vying to enter the Blue House: Moon Jae-in from the Democratic Party, Ahn Cheol-soo from the People’s Party and Hong Jun-pyo from the Liberty Party.

According to opinion polls, Moon is the front-runner with a widening lead over his nearest challenger Ahn; Hong is not far behind Ahn, but his chances have been reduced by public disenchantment with the Conservatives, allied with the Park family. However, it’s important to mention that over 20 percent of people polled in recent weeks claim to be undecided, while another 30 percent thought they could change their mind at the last minute. The poor performance of candidates in TV debates has increased indecisiveness. This might generate a high percentage of abstentions benefiting Moon.

As has been happening in all elections of late around the world, the principal public interest is in the economy. All the presidential candidates seem to lack a credible plan at a worrying time for the country. Unemployment among young people reached 9.8 percent last year, the highest figure since 2010, and the total jobless figure has exceeded one million for the first time, after several companies experienced a severe depression in their particular industries.

Here, Moon has promised to raise the number of government employees. This may be attractive for many South Koreans seeking stability, but it is questionable whether it’spracticable. Ahn has been more rational, placing emphasis on economic reform, believing small and medium-size enterprises, as well as startups, need to lead the country’s growth, not the all-powerful chaebols, the business conglomerates long dominating the Korean scene. He’s prepared to support the small fry with some public funds.

Foreign policy is equally dominant in the pre-election campaign. Attention is on the stance of candidates towards the American-deployed THAAD anti-missile system to cope with North Korea. The three leading candidates have different positions on THAAD. Moon has opposed its deployment; Ahn was against at the beginning but later said that “its placement must take place according to due process.” Hong is in favor, supporting strategic decisions made by his party’s former leader Park. With reference to North Korea, Moon advocates trying to build trust with Pyongyang. In that regard, some analysts have drawn parallels with the so-called “Sunshine Policy,” which refers to the support and cooperation offered by the South to the North from 1998 until 2008.

For his part, Ahn has left the option of dialogue with Pyongyang open, preferring to be tough in his rhetoric about the need of sanctions against it. Perhaps he believes that this is the only way he can attract conservative voters who traditionally support the Liberty Party. For his part, Hong has never hidden his hardline approach vis-à-vis North Korea and he even advocates redeployment of U.S. tactical nuclear weapons in South Korea.

On this basis, the next president of South Korea will face a serious dilemma in dealing with Pyongyang as well as in advancing his country’s partnership with the U.S. In a recent interview with Reuters, President Donald Trump said that he would either renegotiate or terminate what he called a “horrible” free trade deal with South Korea. In addition, he called on Seoul to pay $1 billion towards the cost of deploying and maintaining THAAD. The next South Korean leader, therefore, will have to decode Trump’s real intentions about North Korea, because it’s the South that will first pay a heavy price in any military attack. A few days ago, the U.S. House of Representatives overwhelmingly voted to impose new sanctions on Pyongyang while Trump himself does not exclude a major conflict, although he has also said he prefers the diplomatic way.

Last but not least, China is carefully looking at developments. It’s not impressed with Moon’s skepticism on THAAD, believing he might reverse approach after the election and actually continue the hardline policy of Park and Hwang. In parallel with THAAD, the finding of a modus vivendi between China and South Korea will also have to be a priority after the election. The impact of China on the South Korean economy is profound and Moon is prepared to make diplomatic efforts to resolve the current misunderstanding. He will also seek cooperation from China on the North Korean imbroglio.

The settling-in process by the new president means Beijing will need to maintain a wait-and-see stance. It is somewhat worrying that the majority of South Koreans see the relationship of their country with China as “competitive.” It will be the responsibility of the new president to change this attitude via new bilateral and multilateral collaboration channels.