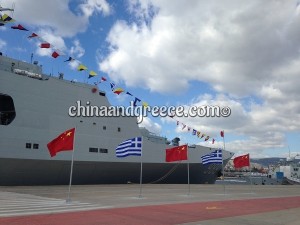 The 18th Escort Task Group of the Chinese Navy paid an official visit to Greece from 16th to 20th February 12, 2015. The Escort Task Group, consisting of the amphibious transport dock Chang Baishan, the missile-frigate Yun Cheng and the repleinishment ship Chaohu, has just fulfilled an escort mission in the Gulf of Aden and set out a five-country tour including the United Kingdom, Germany, the Kingdom of the Netherlands, France and Greece.

Since December 2008, the Chinese Navy has sent 19 Escort Task Groups successively to the Gulf of Aden and the waters near Somalia. They have all accomplished their missions with distinction and offered protection to nearly 6,000 ships including lots of Greek shipowners’ ships. It has since offered protection to 135 Chinese and foreign Ships in 48 groups. In all those operations, there was not a single accident or casualty. 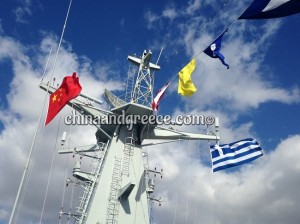 was welcome to board two of the vessels in due time. The Escort Task Group was docked in the Port of Piraeus and the entrance will be E12.