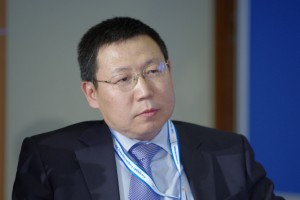 Professor Chen Xin is the Director of the Economic Division at the Institute of European Studies, CASS. He studied Economics at Pécs University in Hungary in late 1980s and International Politics at the Graduate School of the Chinese Academy of Social Sciences (CASS) in 1990s. He obtained a PhD degree in Law. From 2007 to 2008, he was appointed as the Chinese Co-Director of the EU-China European Studies Centres Programme (ESCP).

From October 2008, he was elected to the Secretary General position by the Board of the Chinese Association for European Studies (CAES). His main research interests are EU-China Trade and Economic Relations, European Economy, and Central East European Studies. His latest publications are including Greek Debt Crisis and it Origins (2010), European Sovereign Debt Crisis and Economic Governance (2011), Policy Evolution on EU-China Trade and Economic Relations (2009), Invest in Hungary (2009), Invest in Finland (2010), Invest in Portugal (2011), Euro Debt Crisis: Dilemma of Governance and Solutions (2012), New Tendencies in European Economic Relations toward China (2013), China-EU Economic and Trade relations in the first 10 years of the China-EU Strategic Partnership(2013), An Brief Analysis on the China-EU and EU-US trade relations (2013), China-EU Solar Panel Trade Disputes (2014), European Integration and Ukraine’s Choice (2014), An Analysis on the progress of the Structural Reform in the PIIGS countries in the Eurozone (2015).

In the recent time, he has paid great attention to the Greek crisis, and had published several analysis on the Greek issue at the most influential Chinese media like the People’s Daily (Ren Min Ri Bao), Global Times, as well as Observer (Guan Cha Zhe) , He had also been interviewed by the CCTV News channel the “World Weekly” programme. His publications can be accessed here.