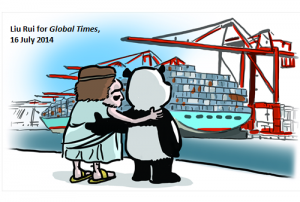 China and Greece have traditionally enjoyed warm relations. Representing two of the most significant ancient civilisations, the countries seem to have much more in common than the geographical distance which separates them. Since the establishment of diplomatic relations on 5 June 1972, the bilateral relationship has been steadily improved. This improvement is also placed within the context of China’s will to strengthen and enhance its relations with the EU as its October 2003 White Paper suggests. The European debt crisis has subsequently given the opportunity to China to play a much more active role at the international level benefiting from its impressive growth. In that regard, Greece is a country highly attracting its attention. The website chinaandgreece.com has been created in order to monitor these developments as well as to explore additional aspects of the deepening Sino-Greek relations.