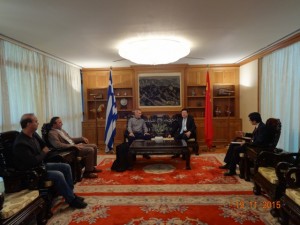 On 19 November 2015 Chinese Ambassador in Greece Zou Xiaoli met in the Embassy of China with Mayor of Piraeus Yiannis Moralis. The two sides had a friendly exchange of views. Ambassador Zou pointed out that the City of Piraeus boasts long history, rich cultural and tourism resources and a promising future as the biggest city near the Port of Piraeus. In recent years, with the development of PCT, the City of Piraeus has been known more and more by the Chinese media. Zou expressed the hope that Piraeus give full play to its unique advantages, strengthen exchanges with China, and serve as an important bridge in the cultural and economic exchanges between the East and West.

Mr Moralis briefed Ambassador Zou on the history of Piraeus. He welcomed increased Chinese investment in the Port of Piraeus and expressed his willingness to create a sound atmosphere for this. He hoped that the Piraeus Port project of PCT would bring development and prosperity to the City of Piraeus and neighboring cities. He said that Piraeus was applying for the European Cultural Capital of 2021. Piraeus is ready to strengthen exchanges with Shanghai, its sister city, which will contribute to friendly cooperation between Greece and China, the mayor said.

Source: Embassy of China in Greece