APEC, China, the US and integration in the Asia-Pacific region 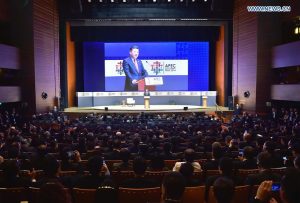 The visit of Chinese President Xi Jinping to Latin America and his attendance at the APEC forum in Peru are happening at a critical moment for world politics. The US presidential election challenges continuity in its foreign and economic policy. Although the current period is an interim one of transition, it provides an opportunity for Beijing to reiterate its standard positions to its partners and explore how it could benefit or at least protect its interests against unexpected changes from January onwards.

To start with, the withdrawal of Obama’s active support for the Trans-Pacific Partnership (TPP) constitutes a favorable development for China. Although this US initiative does not officially exclude China, it aims at creating a free trade area to counter it. Using Trump’s rhetoric in the pre-election campaign against the TTP as a point of reference, it seems that this plan can hardly be on track in the future in the form it currently has. That is because Obama decided not to push for it during a Congress lame-duck session. If this is the case indeed, China’s project for the establishment of a Regional Comprehensive Economic Partnership (RCEP) will gain more ground.

In 2014, Xi said during the APEC meeting in Beijing that a Free Trade Area of Asia Pacific (FTAAP) could be possible in the future. Subsequently, the 21 APEC leaders issued a declaration calling for progress on such a trade agreement. One year later, APEC leaders reconfirmed their commitment in their annual meeting in the Philippines.  According to some calculations made by the Pacific Economic Cooperation Council, FTAAP gains will be some eight times that of the TPP – close to $2 trillion by 2025 – and three times that of a RCEP. These estimations presuppose that the TPP and RCEP templates will be bridged by the establishment of an FTAAP, although obstacles are evident.

In that regard, The New American has asserted toward the end of 2015 that “TPP is foundation for FTAAP.” This prediction is now outdated. By contrast, a RCEP is the pathway which is seen as more realistic leading to an FTAAP, if the TPP only remains a theoretical plan.  Obviously, Sino-US cooperation is necessary for an FTAAP to be implemented irrespective of whether a RCEP or the TPP would constitute its basis. Trump considers globalization almost an anathema. He seeks to put limits on free trade and review already existing practices. His view not only targets the TPP but also other zones sharing the same logic of trade and investment cooperation without tariffs and barriers such as NAFTA. As a matter of principle, China disagrees. It therefore closely monitors the situation in order to prevent damage in the Sino-US economic and financial relationship, which remains its top priority.

Subsequently, China now faces an unprecedented challenge. On the one hand, it is now able to lead at the regional level, making the vision of Xi for the creation of an FTAAP a reality at the APEC level. And on the other hand, China might face a difficult opponent toward this direction as the new US president seems determined to put into question American traditional principles on trade liberalization.

In other words, although conditions leave room for the implementation of an FTAAP and China’s leadership, Trump could advocate for a rather different US role on the matter, which could distance his country from this regional integration plan in the Asia-Pacific region. The dilemma for Trump will be whether he should leave the future of further APEC integration in the hands of the Beijing administration or abandon his pre-election argument regarding globalization. All this leads China to hold a wait-and-see stance in Peru, and in the immediate aftermath of the APEC forum. It will be perhaps wise for this patient stance to be grounded on two elements until the situation crystallizes. The first is the final say of Trump on the TPP. And the second is his final thinking on what the slogan “Make America Great Again” will mean for the position of his country in APEC.

In any case, as Xi said two years ago, “The FTAAP does not go against existing free trade arrangements, which are the potential pathways to realize [its] goals.”