The Athens Declaration on the establishment of the Ancient Civilizations Forum 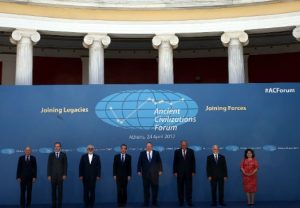 Referring to the heritage of the great ancient civilisations of the states they represent and the international resonance of each individual culture,
Underlining that, transcending time, the impact of these civilisations is omnipresent and remains actual to this day, decisively influencing the course of humanity,

Regarding richness and diversity of cultures as the great heritage of mankind, and as an essential accumulative contribution that continuously enriches the collective human civilisation, both historically and at the present day,
Bearing in mind that civilisations throughout the course of humanity have not ceased to interact and communicate,

Supporting the Olympic Ideal, the idea of Olympic Truce, as well as sportsmanship and fair play, as means for promoting communication, friendship and mutual understanding,

Taking into consideration the rapidly changing and complex challenges that the world is facing, such as terrorism, radicalization, extremism, violence, racism, racial discrimination, xenophobia and other forms of related intolerance,

Strongly advocating friendly relations and continuous dialogue between countries, and the need for international cooperation and understanding as a means to address cultural, social, economic and political challenges,

Stressing that each State bears the primary responsibility of providing protection for its cultural heritage, while underlining the positive contribution of international cooperation with the State concerned upon its request and based on its relevant priorities, including through UNESCO and the other relevant United Nations specialised agencies, programmes and funds,

Deploring the fact that armed conflicts have become both a serious threat to the integrity of world heritage monuments and the cause of illicit trafficking in cultural property deriving from armed conflict areas,

Devoted to prevent and counter any future destruction of archeological sites and cultural heritage in general caused by terrorist acts,

Highlighting the need for further cooperation in fighting against and preventing effectively illicit trafficking in cultural property and ensuring their restitution and safe return to their countries of origin,

Recalling the relevant UN Security Council and UN General Assembly Resolutions on the protection and safeguard of the cultural heritage and property as well as the relevant Resolutions of the UNESCO General Conference,

Reaffirming their strong support for UNESCO’s primary role in promoting the protection and preservation of cultural heritage,

Recognizing civilisation and cultural diplomacy as a soft and smart power, and as a major component of international relations, and agreeing that culture can and must be further deployed as an agent of economic growth.

The need to enhance the dialogue among civilisations through continuous communication and cooperation, in order to promote understanding, recognition and tolerance between cultures and peoples.

The importance of using the dialogue among civilisations as a powerful tool of diplomacy, thus contributing to bridging gaps and enhancing mutual understanding.

Advancing the Belt and Road Initiative for international cooperation, among others, will play an important role to promote civilisational dialogues and increase people-to-people bonds.

Their will to strengthen cooperation on cultural issues among the participating States, with a view to enhancing the sustainable social and economic growth of each ACF member.

To establish the Ancient Civilisations Forum (ACForum) with the participation of the following countries: Bolivia, China, Egypt, Greece, Iran, Iraq, Italy, and Peru, as a platform for dialogue and cultural cooperation among the participating States. The Forum shall be open to future enlargement on a consensual basis.

To encourage communication among participating States regarding cultural exchanges and cooperation in all related fields.

To conduct dialogue and consultations with a view to reaching coordinated positions where appropriate, on issues of major importance relating to the protection of cultural heritage, within the relevant international organizations, such as UNESCO.

To examine the most appropriate ways to enhance the ACForum’s efforts to optimize the use of culture as an effective tool for contemporary diplomacy.

To work together, as appropriate, and in coordination with UNESCO, in order to safeguard the historical and cultural heritage of the ACF members,

The next Ministerial Meeting will be held in 2018 in Bolivia. Peru expressed its readiness to host the annual Meeting in 2020 and Iraq in 2021.