Cooperation between Bank of Greece and China Development Bank strengthened 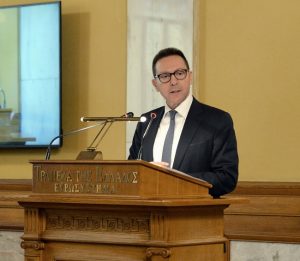 On Tuesday 28 February 2017, Governor of the Bank of Greece, Yannis Stournaras, held a meeting with President of China Development Bank, Hu Huaibang, and a delegation from the Chinese Bank. The meeting took place following the signing of a Memorandum of Understanding between the two sides in July 2016. Τhis Memorandum stipulates for the promotion of the Sino-Greek relationship and the bilateral trade cooperation. The China Develoment Banks is one of the most important development banks in the world and the biggest China has in the field of foreign investments and financing collaboration.

Mr Stournaras welcomed the intention expressed by China Development Bank  to expand its presence in Grece by financing inftrastructure projects. In particular, he said that ‘the promotion of entrepreneurship  and foreign direct investments constitute the most important tools in Greece’s recovery effort’. From his part, Mr Hu Huaibang said that China Development Bank places emphasi on Europe in order to achieve its enlargement to foreign markets and has established special funds for financing enterprises in several European countries, including Greece.