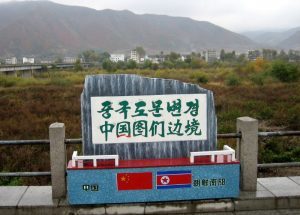 EXECUTIVE SUMMARY: The North Korean imbroglio has been affecting Sino-American relations for months. Washington and Beijing agree on the urgency of mitigating risks stemming from the unpredictable behavior of North Korean leader Kim Jong-un, but differ on methods to achieve that objective. President Trump has abandoned the “strategic patience” ethos of the Obama era and criticizes Beijing for not putting greater pressure on Pyongyang. For its part, Beijing is concerned about instability on the Korean Peninsula as the US military presence expands and the “regime change” prescription gains ground.

The US, an established political and economic superpower, and China, an economic colossus and rising political power, are attempting to find a modus vivendi that will define international relations. Optimistic scholars believe their differences will be solved peacefully in the interest of global stability, but pessimistic analysts express the view that their rivalry and contradicting interests will ultimately involve armed forces.

At the time of this writing, the new US administration and the Chinese leadership have been engaged in preliminary discussions on a variety of topics (diplomacy and security, economics, law enforcement and cybersecurity, and social and cultural issues) following the agreement reached between Presidents Trump and Xi at Mar-a-Lago in April 2017.

It is the North Korean imbroglio, however, that is dominating the agenda of Sino-American negotiations.

When Trump came to power, his approach to the matter was not yet clear. However, when Pyongyang began to carry out ballistic missile tests in February, the president quickly responded. Washington increased its military presence in the Korean Peninsula by dispatching warships, and, more significantly, announced that it was abandoning Barack Obama’s principle of “strategic patience.” At a press conference in Seoul in March, Secretary of State Rex Tillerson said that this policy had ended and that “all options are on the table.” A war scenario cannot be eliminated a priori, although it is widely viewed as a last resort.

As the US formulates its new policy, it is taking steps to manage the unstable situation. The Wall Street Journal has revealed, for instance, that American diplomats are holding secret talks in Pyongyang and European cities with North Korean top nuclear negotiator Madame Choi Sun Hee. There has also been some “sports diplomacy.” Former NBA star Dennis Rodman often travels to Pyongyang to meet Kim Jong-un (though his June visit did not yield any notable results).

College student Otto Warmbier, a tourist to North Korea who had been summarily arrested and sentenced to fifteen years’ hard labor, was returned home, raising hopes of a diplomatic breakthrough. But he arrived in a coma and almost immediately passed away after his arrival in the US, a grim conclusion that put paid to those hopes.

Washington is relying heavily on Beijing to help solve the North Korea problem. Convinced that that Beijing can significantly influence Kim’s behavior, should it seek to do so, the Trump administration is urging it to put economic pressure on Pyongyang and push it towards rational engagement with the international community; but progress on this front has so far been poor.

During testimony before the US-China Economic and Security Review Commission in June, it was argued that “Beijing still does not want to implement punitive measures that might push North Korea to relinquish its nuclear weapons or to withdraw its economic safety net.” Trump himself has often tweeted along similar lines. His April tweet was characteristic: “China is very much the economic lifeline to North Korea so, while nothing is easy, if they want to solve the North Korean problem, they will.” He published a similar tweet only hours before meeting Xi on the sidelines of the G20 Summit in Hamburg in July.

The relationship between the Chinese administration and Kim Jong-un cannot be fully understood. While Beijing and Pyongyang enjoy political and cultural proximity, there have been no meetings between the leadership of the two sides since Kim came to power. It should be recalled that when Kim conducts missile tests, the security of northeast China is threatened. The Chinese media regularly criticize him for jeopardizing his country’s future. A recent Global Times editorial asserted unequivocally: “At least for now, what North Korea is doing goes against China’s strategic interests.”

Beijing opposes Pyongyang’s nuclear programs, but disagrees with Washington on how to rein them in.

A war on the Korean Peninsula would be anathema to Beijing, which does not want to see North Korea completely devastated. The regional and international implications of such an outcome cannot be foreseen, the scale of the conflict cannot be anticipated, and a huge flow of refugees from North Korea to China would be created. Beijing is extremely wary of the ambition in Washington to achieve regime change, a development that could – in its view – bring about greater instability.

China proposes instead that the Six Party Talks be relaunched. Their long-term goal would be to bring Pyongyang to the negotiations table and offer it motivation to cooperate. According to Beijing, Pyongyang currently has nothing to gain by compromising. Beijing is also downplaying Washington’s insistence that China implement the portion of UN Resolution 2321 that suspends all imports of coal from North Korea into China until the end of 2017.

Meanwhile, the American military presence is steadily increasing. The US fleet around the Peninsula is growing, and the Terminal High Altitude Area Defense system (THAAD) has been deployed in South Korea.

At the first US-China Diplomatic and Security Dialogue at the State Department in June, the two countries failed to bridge their differences on North Korea. However, their future efforts might be influenced by the result of the May election in South Korea. The new president, Moon Jae-in, did not look favorably on the deployment of THAAD, and supports trust-building with Pyongyang. This approach is fundamentally different from that of former presidents Park Geun-hye and Hwang Kyo-ahn (who replaced Park after impeachment). In an interview with CBS a few days before meeting Trump at the White House towards the end of June, Moon portrayed North Korea as an “irrational regime” but said “dialogue is necessary” because the problem had not been solved through sanctions or pressure.

On the sidelines of the Hamburg G20 Summit, Moon briefed other world leaders on what he calls the Korean Peninsula Peace Initiative. The US has not publicly commented on the initiative, but a Chinese Foreign Ministry spokesperson welcomed it.

A prognosis on future developments is very difficult, not only because Moon’s plan is unclear and its efficiency doubtful, but because Trump’s comments remain ambiguous. While he is considering “severe things” for North Korea without drawing a “red line” (according to a speech he gave in Poland in July), he has told reporters that he “never gives up” on working with China.

Whether Beijing holds the key to a diplomatic solution or not, the risk of a lose-lose situation is alarming the international community. Kim-Jong-un’s unpredictable nature only multiplies anxieties.