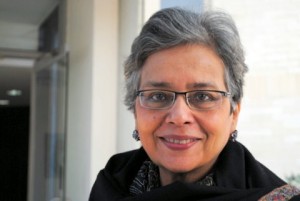 While the Greek issue is on the agenda of the European leaders and the eurogroup, Greek Prime Minister Alexis Tsipras travelled to St.Petersburg to attend the International Economic Forum. On this occasion, he also had the opportunity to meet with Russian President Vladimir Putin approximately two months after their first meeting in Moscow. The potential participation of Greece in the BRICS New Development Bank will be certainly discussed. The website chinaandgreece.com invites Indian scholar Jayshree Sengupta, who is a Senior Fellow at the Observer Research Foundation, New Delhi*, to share her view with emphasis on the position of India.

Will India support the Russian proposal for Greece to enter the BRICS Development Bank?

India has recently appointed K.V. Kamath as the governor for the BRICS Development Bank. Whether India will support Greece’s entry is hard to say at this point. There has also been no discussion in the media about the proposal.

How could Greece participate taking its problematic economic situation into account?

Greece has nothing to lose in taking on the invitation by Russian Deputy Finance Minister Sergei Storchak and joining the BRICS Development Bank. It has a lot of debt that has to be repaid and so it cannot be expected to contribute towards the Bank’s capital. But its entry will enable it to borrow for its own restructuring and development programme and this would allow it to leave the austerity track that it has been forced to follow.

How can member states benefit by joining the Bank scheme?

All member states will benefit through unconditional loans that could enhance infrastructure and connectivity that would be good for trade, investment and job creation for the youth.

Could the BRICS banks provide loans to Greece and at what interest rates and under which terms?

The BRICS bank has to be operational first and surely it could provide loans to Greece especially if Russia and China are sympathetic towards its state of despair where the economy has shrunk by 25 per cent and there is mass unemployment, loss of dignity of workers and citizens which has led to an increasing number of suicides. At what interest rates the loans will be given is hard for me to project but surely BRICS Development Bank will not impose the conditionalities that the TROIKA has imposed and there will be, in all likelihood, much easier terms for repayment. The BRICS Bank will start functioning as an alternative to the IMF if Greece joins!

*After graduating from Delhi School of Economics, Delhi University with MA in Economics, Jayshree Sengupta studied at the London School of Economics where she completed MSc. Econ and M. Phil in Economics. She worked in the National Institute of Economic and Social Research, London. She was a lecturer in Miranda House and Indraprastha College ( Delhi University) from 1970 to 1977. She was Programme coordinator at Indian Council for International Economic Relations ( ICRIER), New Delhi from 1981-1985. She has worked on commodities trade—tea, jute, leather and cotton.

She was a consultant for World Bank Washington D.C. from 1985-1990 and in OECD  (Paris) in 1991. She coauthored a book with Professor S. Sideri of ISS ( Hague) on ‘The 1992 Single European Market and the third World( Frank Cass, London) in 1992. From 1994-1998 she was a Consulting Editor at the Obeserver of Business and Politics, New Delhi. She was a Senior Editor in Hindustan Times ( 1998-2004). At the ORF, she has written a book on the Indian Economy, “A nation in Transition, Understanding the Indian Economy” ( Academic Foundation, New Delhi, 2008). She has recently edited the book ‘Global Meltdown, EU and India perspectives’ ( Academic Foundation, New Delhi 2102).

She has been a columnist in all major newspapers in India and has a column in the Tribune. She has presented papers in various international conferences on India, China, Nepal, Sri Lanka and the EU on subjects of urbanization, rural development,  healthcare in India and among BRICS,  future global economic trends, global financial architecture and empowerment of women.