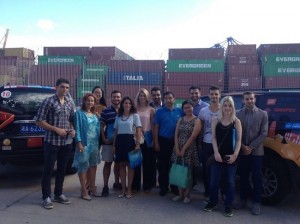 A Chinese delegation of TV show series ‘Silk Road’ came to Greece in the first week of September 2014. COSCO organized a welcome ceremony on 2 September. Ambassador of China to Greece Zou Xiaoli, Secretary-General of Hellenic Ministry of Foreign Affairs Panagiotis Michalos, Captain Fu Chengqiu of COSCO PCT and representatives from Business Confucius Institute attended the ceremony. Ambassador Zou Xiaoli stated that leaders of both countries have already reached a consensus on promoting the construction of ‘Silk Road economic belt’ and ‘21st century maritime Silk Road’. As he predicted, China and Greece – these two ancient civilizations – will co-operate in a harmonious way and create a brilliant performance during this process, achieve common revitalization, and make a great contribution to world peace and human civilization.

From his part, Secretary-General Panagiotis Michalos extended his warm welcome towards the Chinese delegation. He said that Sino-Greek relations are based on a deep friendship and mutual understanding and expressed the interest of Greece to expand its cooperation with China during the construction of ‘one belt one road’. Additionally, students who learn Chinese language in Business Confucius Institute presented the famous Greek song ‘The Children of Piraeus’ in Chinese while welcoming the delegation.

Reporter Athina Deng of chinaandgreece.com is one of the few people from Shaanxi, which is also the hometown of President Xi Jinping, living in Greece. Athina was interviewed by the Chinese delegation wishing a successful completion of the show, and extended her wishes towards her family in China on the upcoming traditional Mid-Autumn festival. The welcome ceremony was broadcasted live on China Shaanxi TV. The Athens-Macedonia News Agency also covered the event.

‘Silk Road’ media delegation was hosted by Shaanxi TV and included journalists from Xinhua News Agency, CCTV, CRI, Guangming Daily, Phoenix TV and many other major Chinese media. They started from Xi’an, the easternmost of ancient Silk Road, two months ago and went all the way west by crossing many countries. They arrived in Athens on 1 September. Their next stop was Italy.