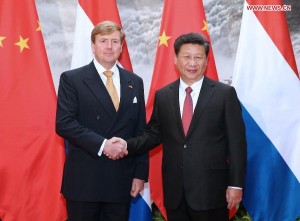 President Xi Jinping and visiting Dutch King Willem-Alexander agreed on Monday 26 October 2015  to boost cooperation in the China-proposed Belt and Road Initiative and the Asian Infrastructure Investment Bank (AIIB). ‘China hopes to work with the Netherlands to build the AIIB into a win-win, professional, highly-efficient platform for infrastructure financing,’ Xi said during their talks at the Great Hall of the People, Beijing.

The Netherlands is one of the 57 prospective founding members of the AIIB, which has authorized capital of 100 billion U.S. dollars and is expected to start operation at the end of this year. King Willem-Alexander told Xi that his country is ready to join the Beijing-led AIIB, and supports the proposal to combine the Belt and Road Initiative with the Investment Plan for Europe. The Belt and Road Initiative, which refers to the Silk Road Economic Belt and the 21st Century Maritime Silk Road, was unveiled by the Chinese president in 2013. It brings together countries in Asia, Europe and Africa, with the purpose of improving infrastructure, financial cooperation and cultural exchanges in those regions.