China becomes an emerging power in the Mediterranean 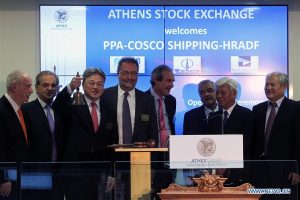 For many decades the Mediterranean has been a West-friendly region. The US and the EU have had the lion’s share in defining the course of the Basin and the relationships with the majority of its countries. In particular, Washington is an unquestionable economic, diplomatic and security actor also being NATO’s driving force. For its part, Brussels is seeking to boost its international role and strengthen the Euro-Mediterranean partnership by proposing integration projects such as the ‘Barcelona Process’ and later the Union for the Mediterranean.

However, in recent years the US decision to turn its attention towards the East in parallel with the European debt crisis, which has almost paralyzed EU’s foreign policy capacity, as well as the ‘Arab Spring’ have started to slightly alter the landscape or at least leave the door open for other powers to explore similar opportunities. For its part, China has slowly attempted to have a presence in the Mediterranean by investing in logistics and infrastructure works. This presence has been evident by its vast economic resources, its systematic and long-term planning and the immediate economic benefits it brings to the region.

China’s approach vis-à-vis the Mediterranean has been given a new push since 2013 when President Xi Jinping first talked about the Belt and Road Initiative. Four years later almost all Mediterranean countries – either EU or non EU-member-states – have already improved their bilateral relations with Beijing experiencing the ‘win-win’ nature of Chinese investments. Although the type of investments varies according to different business opportunities offered by Mediterranean countries, they all outline that China is an emerging power in the Basin.

Numerous examples can be given. Starting with EU member-states, COSCO Shipping’s involvement in the Piraeus port has transformed it into a Mediterranean transshipment hub while the port might function as starting point for a high-speed train line connecting Greece with Hungary via the Balkans in the future. Moreover, China is active in Italy.  Only a few months ago, COSCO Shipping acquired a 40 percent stake in the Italian port of Vado near Genoa. Also, China Communication Constructions Company Group (CCCG) was awarded a contract to design Venice’s offshore port. Chinese companies also invest in the Italian technological sector and historical football clubs such as Milan FC have been bought by Chinese businessmen.

France and Spain constitute additional examples where the Belt and Road Initiative is passing from. The new French president Emmanuel Macron – who highly respects China’s history – has already announced that he will visit Beijing at the beginning of 2018 to discuss new economic projects. It is important to remember that a Chinese-French consortium will build the Hinkley Point nuclear station in the UK. And two years ago Prime Minister Li Keqiang visited the city of Marseille to refresh trade collaboration between its port and China. With reference to Spain, there are only a few weeks COSCO Shipping has reached a deal for a 51 percent stake of Noatum Port, a Spanish container terminal operator in the ports of Valencia and Bilbao. As it also the case with Italy, Chinese businessmen are investing in successful football teams such as Atletiko Madrid and several Spanish cities are signing sister agreements with Chinese ones.

Continuing with non-EU member states, Sino-Turkish relations are marked by a spirit of solidarity which goes beyond the business field such as the bilateral deal for the construction of Turkey’s third nuclear plant and COSCO Shipping’s investment in the Ambarli port. Foreign Minister Mevlut Cavusoglu visited Beijing at the beginning of August and confirmed Ankara’s commitment to fight terrorism by saying that it would not allow ‘any anti-China activity inside Turkey or territory controlled by Turkey’. Furthermore, China’s relations with Israel are developing fast as the former finds the latter’s innovation capacity attractive and heavily invests in the construction sector. Port diplomacy should not be ignored either. China Harbors Pan Mediterranean Engineering Company (PMEC) will construct the new port of Ashdod and Shanghai International Port Group (SIPG) will operate the Haifa port. Possibly a Chinese company will construct the ‘Red-Med’ railway connecting the Red Sea with the Mediterranean.

In addition, North-African countries are part of the Belt and Road Initiative.  In his January 2016 visit in the Middle East, for example, President Xi made a stop in Egypt where he signed 21 deals worth about $15 billion, mainly in sectors like electricity, transportation and infrastructure.  China State Construction Engineering Corporation (CSCEC) has also agreed with Algeria to build and exploit the new center transshipment port of Cherchell. Last but not least, China is exhibiting a high interest in cooperating with Morocco. China’s HAITE Group, for example, will set up an industrial and residential park in the northern city of Tangiers with investments worth of approximately $10 billion.

All in all, the Belt and Road initiative certainly constitutes a critical reference point for the Mediterranean and its future. People-to-people exchanges and emphasis on cultural collaboration will further improve China’s public image in the medium and long-term. In that regard, the Athens Civilization Forum, which took place last April in the Greek capital with the participation of countries such as China, Greece, Italy and Egypt, was a good beginning. More importantly, Xi’s vision will be successful and leave its permanent stamp by generating prosperity, contributing to peace and also offering a model of cooperation between peoples with different religions, namely Christianity, Judaism and Islam. This will mark a fundamental difference for a region historically and currently being encountered with political tensions, social crises, conflicts and terror.