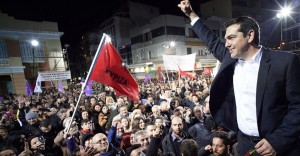 One day after the Greek national election of 25 January 2015 China congratulated left-wing SY.RIZ.A party on its success, expressing willingness to advance bilateral ties with the new government. According to Foreign Ministry spokeswoman Hua Chunying: ‘We have noted the victory of SY.RIZ.A in the smooth parliamentary election of Greece. The Chinese side expresses its congratulations. China and Greece enjoy long-standing friendship, with the two peoples closely attached to each other. The Chinese side highly values relations with Greece and hopes to work together with the new Greek government to deepen exchanges and cooperation in various areas and keep advancing the comprehensive strategic partnership of China and Greece. China consistently supports the process of European integration, and is happy to see a European Union that showcases solidarity and strength’.