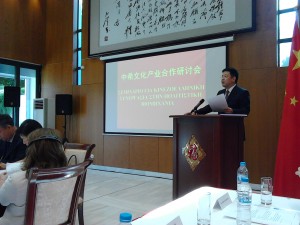 In its effort to establish new contacts in Greece and search for reliable partners, a delegation of the China Cultural Industry Association headed by its President Mr Zhang Bin visited Athens on 7 August 2015.  Mr Zhang, met inter alia, Greek Alternate Minister of Culture Nikos Xydakis and Secretary General for Information and Communication Mr Eleftherios Kretsos to discuss further steps of co-operation. 2015 is the ‘China-Greece Maritime Cooperation Year’ and China has already officially proposed for the next one – 2016 – to the ‘China Greece Cultural Industry Cooperation Year’. If this happens and Greece agrees, it will be the first time for China to implement such a project at the bilateral level.

Within the context of the Chinese delegation visit to Greece, the Embassy of China in Greece organised a seminar on ‘China and Greece Cultural Industry Co-operation’ to give the opportunity to significant Greek actors to present their work and forge closer co-operation with Chinese authorities. Ambassador of China to Greece Mr Zou Xiaoli introduced the China Cultural Industry Association Industry and focused on the need for more contacts and exchanges between China and Greece at the cultural level.  Among other, he said that ‘China has a long way to go to match the historical position of its culture and the strength of its economy’ and saw Greece as a useful partner having ‘profound cultural foundation. rich tourism resources, a large numbers of professionals in the cultural sector and highly-international marketing channels’. 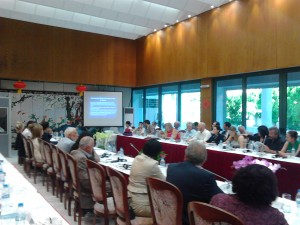 For his part, President of China Cultural Industry Association Mr Zhang Bin proposed for China and Greece to create a cultural industry zone and establish a mechanism to facilitate co-operation. In his view, maritime civilization, theatre, movies, digital games, concerts, seminars on Olympism and research on the ancient Silk Road could be on the agenda. As Mr Zhang said, China and Greece might play a critical role for the establishment of a world association of cultural industries.