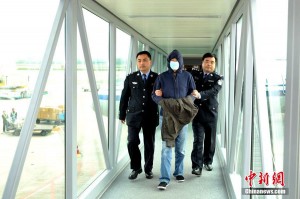 The Chinese government’s latest operation to repatriate suspected economic criminals has nabbed its first suspect.The suspect, who is accused of embezzling some 40 million yuan from a company he ran in Zhejiang, has been apprehended in Greece.

He’s the first to be arrested under the ‘Fox Hunt 2015’ program initiated earlier this month.The suspect was tracked down with the help of an Interpol ‘red notice’ issued in October.

Though China has no extradition treaty with Greece, the country’s courts have ruled he can be extradited. Zhang Shencai is with the Zhejiang Public Security Bureau’s Economic Investigation Office.

‘Greece made a ruling on the case according to existing clauses between the two countries. The Greek courts have ruled in favor of extradition. The success of the suspect’s extradition should deter suspects from fleeing their economic crimes. It also shows the international society’s determination in law enforcement.’

‘Fox Hunt 2015’ is part of a larger campaign called ‘Sky Net’ that combines government, Party, law enforcement agencies, the central bank and China’s diplomatic services. The overall goal is to repatriate Chinese nationals who have fled abroad, as well as recoup the money they’ve stolen.