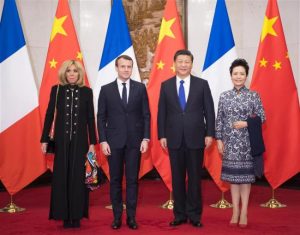 In 1964 Chairman Mao Zedong and General Charles de Gaulle decided to establish diplomatic relations between China and France opening a new chapter in their relationship. Since then the bilateral relationship has grown at the economic, political and cultural level. 54 years later Presidents Xi Jinping and Emmanuel Macron met in Beijing and decided to further advance it. Subsequently, the comprehensive strategic partnership will be further developed. As Xi said, ‘bilateral ties stand at a new starting point’ and ‘China stands ready to promote exchanges and enhance mutual trust and cooperation with France’.

The two countries are sharing several goals and concerns. Their commitment to build an open global economy and support globalization, for instance, is of high significance in a period during which the Trump presidency is introducing a different thinking with his ‘America First’ policy. That is because Xi and Macron agreed in working together for the strengthening of the role of G20. It is on the occasion of the previous G20 Summit in Hamburg where the two leaders had the opportunity to meet for the first time. During that meeting Xi extended an invitation to Macron to visit China.

Moreover, China and France are collaborating on the liberalization and facilitation of trade and investment while endorsing the principle of multilateralism. Specifically, they believe that all WTO members need to strengthen the implementation of multilateral requirements and disciplines including in terms of transparency and subsidies notification, so as to maintain the strength and credibility of the multilateral system. On the same wavelength, Beijing and Paris are decisive to cooperate at the IMF level, improving its quota and governance structure.

Important as they are the afore-mentioned issues of agreement do not constitute new elements in the bilateral partnership. By contrast, what is new and deserves particular attention is the straightforward French support for the Belt and Road Initiative. ‘France welcomes the Belt and Road Initiative’ as the Joint Declaration stipulates. This clarification is promising as the EU has recently been skeptical on Chinese investments in Europe launching a screening mechanism. This said, China and France are also interested in injecting impetus to Sino-European relations. The former is supporting the integration of the EU despite the view of a few critics that it is diving it and both will continue to work actively to implement the China-EU 2020 Strategic Agenda for Cooperation.

From another perspective, trade is equally significant for both China and France. In 2016, the bilateral trade volume reached $75 billion to continue its rise in the last two decades. E-commerce will only contribute to an increase of turnover. Unsurprisingly, Chinese online retail giants JD.com and Alibaba announced during Macron’s visit that they would sell more French products on their platforms and create logistic centers in France. And many more business deals are expected to be reached in the short and medium term. The Chinese aviation, for example, is interested in buying new aircrafts by French colossus Airbus. In addition, cooperation in the field of nuclear energy is flourishing. In parallel with the future development of the Hinkley Point C project in the UK, China General Nuclear Power Corporation (CGN) and the French Alternative Energy and Atomic Energy Commission (CEA) agreed to cooperate on areas such as nuclear reactor technology, advanced fuels and materials, and nuclear fuel cycles.

Last but not least, Beijing and Paris are both showing responsibility in dealing with critical challenges. They are doing so by coordinating their actions in international organizations such as the UN and respecting international law. Examples include the fight against terror i.e. in Africa where G5 Sahel is addressing the issues of peace and security as well as the combat against terrorism financing. As it was outlined during the stay of Macron in China, the two countries are on the same page regarding important international issues. The Korean crisis, the civil war in Syria, the Middle East Peace Process, the Libyan political dialogue and the Joint Comprehensive Plan of Action on the Iranian nuclear program find the two presidents largely agree. Needless to say that their determination to keep the Paris Climate Accord alive cannot but be applauded.

To sum up, perspectives are bright for the future evolution of Sino-French relations. Xi and Macron are developing a good personal chemistry and are motivated by history, their vision for the future and realism. More is expected in the coming years.