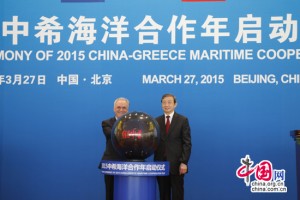 During their meeting of 27 March 2015 in Diaoyutai State Guest House in Beijing, Chinese Vice-premier of the State Council Ma Kai and Greek Deputy Prime Minister Ioannis Dragasakis emphasised on the importance of Sino-Greek c0-οperation. Mr Ka said the Chinese government seeks to increase exchanges at all levels and deepen cooperation in all areas with Greece on the basis of mutual respect, trust and benefits. As he said this approach can lead the Sino-Greek relationship into a new phase. The Chinese side considers Greece as a good friend and an important partner in the EU, and hopes that Europe will be more united, more prosperous and more stable. From his part, Mr Dragasakis noted that the strategic relationship between Greece and China is a major priority of the Greek diplomacy. The Greek side wants to take the advantage and to be actively involved in the ‘One Belt One Road” of China, and boost co-operation between the two countries in areas such as the economy, trade, investment, ports, and culture. After the meeting, Mr Ka and Mr Dragasakis participated in the opening ceremony of ‘2015:China-Greece Maritime Co-operation Year’ and ‘Deepening Maritime Co-operation and Creation of a Blue Culture’.