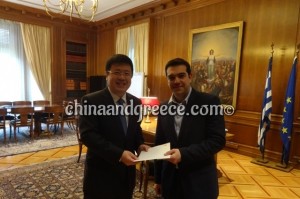 COSCO is the preferred bidder for the sale of a 67 percent stake of Piraeus Port Authority. Following the submission of a higher offer by the Chinese company in comparison to its first one given on12 January 2016, the Greek Privatisation Fund paved the way for this major investment in the port of Piraeus.  Initial comments by shipowners, entrepreneurs and relevant actors are encouraging. President of the Hellenic-Chinese Chamber Constantine Giannidis, for instance, argues that Piraeus ‘has the potential to become the leading hub for container transportation in Europe’.

The image of China in Greece is highly positive. China and Greece represent two of the most ancient civilisations while the former publicly supported the latter in extremely difficult moments of the debt crisis. Nevertheless, the privatisation of the Piraeus Port Authority will generate some reactions  to be started mainly by trade unions. Drawing on the experience from COSCO’s investment in Piraeus in 2009, it seems that trade unions can be successful for a few days but not in the long run. In the final account, governements make criticial decisions such as the ones on privatisations – and not representations of workers.

The Chinese company should carefully look at the situation but not be particularly concerned. The privatisation deal will be normally concluded and Piraeus will become a significant hub linking Europe to Asia in the context of China’s ‘One Belt One Road’ policy. Beijing can also count on its smart communication policy. That is because it does not publicly become involved in internal affairs of other countries as it often the case with several of Greece’s international creditors.

The future investment of COSCO in Piraeus confirms China’s will to forge closer relations with Greece at the economic and commercial level. In parallel with this, Athens has the opportunity to benefit by the promising momentum and exclore new partnerships. It is not a coincidence that Chinese delegations often visit Greece looking for partners. Moreover, various Greek companies attempt to boost their exports towards China.

After the sale of the Piraeus Port Authority, perspectives for the future are positive. For Beijing,  COSCO’s activity in Piraeus are the head of the dragon for its involvement in Greece. Naturally, more investments are expected.