China and the Islamic State 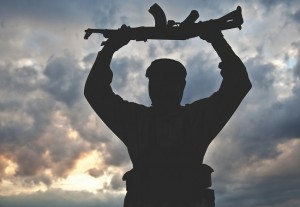 ‘As for the blessed Battle of Paris, we, the Organization of Al Qaeda al Jihad in the Arabian Peninsula, claim responsibility for this operation as vengeance for the Messenger of God, said Nasser bin Ali al-Ansi, a leader of the Yemeni branch of Al Qaeda (AQAP). The aftermath of the France shootings raised many questions. First and foremost made many wonder where the next target is. Commenting on the Paris terrorist attack in the office of Charlie Hebdo, both countries-China and Greece- strongly condemned the events.

On the one hand, President Xi Jinping sent a message of condolences to his counterpart of France Francois Hollande condemning the attack and expressing deep condolences to the victims and sincere sympathy to the injured and the bereaved families. In the message of condolences, President Xi Jinping stated that terrorism is a common enemy of mankind as a whole and a threat faced not only by China and France but also by the entire international community. On the other hand, Greek Prime Minister Antonis Samaras said: ‘On behalf of the Greek people, I express our deep sorrow and disgust for the deadly terrorist attack in Paris’, adding that ‘All the Greeks stand in solidarity towards the families of the innocent victims and we grieve together with the French people who are our friends”. The latter was also present in the world leaders to protest against terrorism in Paris.

ISIS traces its roots to 2002 when Abu Musab al-Zarqawi founded an organisation called Tawhid wal-Jihad in the north of Iraq. Conflict in Iraq and Syria has seen ISIS controls increasing amounts of territory.  As the group rises, many analysts says that future dangers lie in the appeal to Islamists worldwide of their claims to a Caliphate. On that occasion a distinguished scholar, Dr Christina Lin talks on chinaandgreece about the ISIS and the threats it poses to China. According to Dr Lin ‘Islamic State and Al Qaeda have both declared war on China, and claim Xinjiang as part of an Islamic Caliphate’

Dr Christina Lin is a Fellow at the Center for Transatlantic Relations at SAIS-Johns Hopkins University, where she specialises on China-Middle East and NATO relations. She was a 2013-2014 Transatlantic Academy Fellow at the German Marshall Fund and a former visiting fellow at the Washington Institute for Near East Policy. Dr Lin has extensive US government experience working on China security issues, including policy planning at the US Department of Defense, the National Security Council and US Department of State.

What is China’s response to US calls for joint military actions against the Islamic State?

China is supportive of the US-led coalition efforts against the Islamic state, since it is also facing terrorist attacks in Xinjiang and has some estimated 300 Chinese fighters in IS.  However, China as a peer competitor of Washington with ongoing bilateral tensions in the Western Pacific, would not join a coalition under US banner and would prefer to conduct joint military operations under a UN banner.

How does Beijing contribute to the fight against the Islamic State?

China has offered air support to the Iraqi military outside of the US-led coalition, and would likely cooperate with its ally Iran that is already conducting airstrikes in Iraq.  Iran is also a valuable partner in the China-led security bloc, the Shanghai Cooperation Organization. Back in September China and Iran conducted joint naval war games in the Persian Gulf and pronounced closer military ties to signal China’s new proactive stance in protecting its regional interests.

Beijing also sees itself as contributing to global counter-terrorism efforts by fighting jihadists at home.  After 9/11 when US asked China for counter-terror cooperation, China responded that they would do so by clearing their house in Xinjiang.  For China, Xinjiang is the central front in China’s war on terror while the Middle East is the forward front. Indeed, in Guantanamo there were 22 Chinese Uyghur detainees caught fighting with Al Qaeda, so Xinjiang is China’s main front against terrorism.

Is the Islamic State a real threat for China?

Yes, in many ways it is more of a direct threat to China than to the US or Europe.  Geographically it is much closer to China than to the US, and Beijing is increasingly dependent on Mideast energy supply while US is diversifying away from the region.  Islamic State and Al Qaeda have both declared war on China, and claim Xinjiang as part of an Islamic Caliphate.  This is a direct threat to China’s core interests of territorial integrity, internal stability, and energy security.

Xinjiang is the crown jewel of President Xi Jinping’s foreign policy and the Eurasian Silk Road Economic Belt.  It is one-sixth the entire landmass of China, three times the size of France, borders eight countries of Afghanistan, Pakistan, India, Russia, and various Central Asia republics.  It is also a site of strategic minerals as well as China’s nuclear warheads. Many of China’s overland energy supply from the Caspian Sea region and increasingly the Persian Gulf, traverse Xinjiang into the rest of China.

Therefore Xinjiang stability is paramount for Chinese energy security, and in December the Chinese Communist Party promoted Xinjiang governor Nur Bekri to be China’s energy chief, as director of the National Energy Administration. China is also concerned about the increasing linkage between the Islamic State and Chinese Uyghur militant groups such as ETIM and TIP to further attack Chinese territory.  China has witnessed an uptick of terrorist attacks in Xinjiang and other parts of China the past 22 months, and a December 2014 Global Times article revealed ETIM and TIP have added IS to the name of their organizations to signal their allegiance as a new sub-division under the Islamic State.

What concrete measures has China taken to ensure the security of Chinese citizens?

This is still work in progress.  China has about 15,000 citizens in Iraq but currently lacks a large military footprint to protect them.  China is beefing up security for its citizens in other conflict zones such as South Sudan by deploying Chinese combat troops under UN banner, but there is no such force in Iraq.  Should Chinese citizens come under fire at this juncture, Beijing will likely conduct an evacuation operation similar to Libya in 2011.

As such China is slowly stepping up military action in Iraq, with offer for airstrikes and exploring ways for joint military cooperation.  China is already conducting military interventions abroad with joint patrol in the Mekong River between Myanmar, Thailand and Laos, after Chinese citizens were murdered in 2011.  It would likely increase counter-terror forces in Iraq.  Beijing’s traditional special operation units such as the Snow Leopard Commandos (400 officers) have been deployed to Iraq and Afghanistan, and last year President Xi expanded China’s anti-terror forces with the new Falcon Commando Unit, a brigade force of 5,000 officers drawn from the People’s Armed Police.

It is also interesting to note that China’s special forces have gained international recognition over the years, and its elite Snow Leopard Commandos have garnered prestige by winning the SOFEX (Special Operations Force Exercise) Warrior Competition held in Jordan the past two years, beating USA, Germany, and others in this multi-national competition. The pace and scope of China’s military modernization and power projection capabilities continue to amaze China watchers, and we would likely see an expansion of Chinese military footprint in Iraq sooner than anticipated by mainstream media.We would also see an expansion of Chinese maritime footprint off the Syrian coast in the Eastern Mediterranean with the planned joint naval war games with Russia later this year. I actually have a chapter in the forthcoming book The Eastern Mediterranean in Transition: Multipolarity, Politics and Power edited by Spyridon N. Litsas at University of Macedonia and Aristotle Tziampiris at University of Piraeus (Ashgate, April 2015) that further investigates how energy interests will drive Chinese pro-activism in this region.