China.org.cn analyses the impact of terrorism on German politics 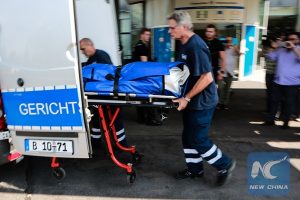 Germany is the new victim of terrorism in the European Union. For several months, security reports presented the country as a potential target. And they were finally proven to be correct. Since July 18, four violent attacks – three of which were committed by refugees with two of them having links to the Islamic State – caused panic among German citizens. These were an axe attack near Würzburg, a mass shooting in Munich, knifings in Reutlingen and a suicide bombing in Ansbach.

Chancellor Angela Merkel interrupted her summer holiday to give a press conference and announce new steps after the dramatic incidents. These include the introduction of an early warning system as well as the voting of a new European law which will make it more difficult for possible perpetrators to buy guns online. The Munich shooter, for instance, had bought his pistol on a mysterious online market highlighting how easy it could be for internet experts to have access to violent materials.

Not all the afore-mentioned attacks are directly related to terrorism. The one in the capital of Bavaria remains relatively unclear because the killer was reported to be mentally ill. The other three rampages, however, were exclusively associated with terror motivations. At first, the question which should be posed is whether the refugee crisis is associated with the rise of terrorism in Europe, now in Germany. The answer that is normally given by politicians and various analysts and journalists endorsing their agenda is negative.

Nevertheless, the reality is rather different. The refugee crisis can be linked to the rise of terrorism indeed, both directly and indirectly. It might be directly connected as some of the perpetrators of terror acts are refugees themselves who experienced the drama of war in their own countries such as Syria and managed to escape from conflict zones fleeing to Europe. The refugee crisis could be also indirectly related to the rise of terrorism as various terrorists – who are second generation migrants and often have the citizenship of an EU country – believe they take revenge for the brutality of Western armed forces against the Muslim world.

The connection between the refugee crisis and the rise of terrorism in Europe does not of course mean that all refugees have to be stigmatized. By contrast, their vast majority consists of civilized, ordinary people who are desperate to save their families and create decent living conditions for themselves and their children in a new country. But this acknowledgment is not sufficient for populists who are on the rise in Europe – including Germany – and who invest in Islamophobia in order to increase their percentages in polls and politically capitalize.

The case of “Alternative for Germany” (AfD) is telling. One year ago, in the summer of 2015, this party was suffering a serious internal crisis because its support for the return of Germany to its own currency had reached its limit. AfD changed leadership and its new leader, Frauke Petry, managed to increase her own as well as the party’s popularity by starting an anti-immigrant and anti-refugee political campaign. As a result, the party scored impressive percentages in the local elections of March, in Baden-Württemberg, Rhineland-Palatinate and Saxony-Anhalt.

Chancellor Merkel finds herself in an awkward position. Although she appeared self-confident in her press conference suggesting that Germany fights a war against the Islamic State and not against another religion, her successful political future could be jeopardized. The next months will be critical in view of the federal election of September 2017. Merkel’s “open-door” approach vis-à-vis the refugees certainly reflects a humanitarian sensitivity but has also generated serious criticism and frustration in the political arena and in terms of public opinion.

Apart from the AfD, the Christian Social Union (CSU), which is the sister party of the Chancellor’s Christian Democratic Union (CDU), has threatened to withdraw its support from the government and is currently pressing for strict measures against the refugees. The public sentiment in Germany also contains anti-migrant elements, especially after the attacks against women by Muslims in Cologne on New Year’s Eve. This tendency is expected to be reinforced after the recent terror acts facilitating the development of racist, anti-refugees movements such as “Pegida.”

Following the result of the U.K. referendum, the popularity of Angela Merkel has increased in Germany. On the whole, she is perceived as a leader who can safely steer the country during difficult times. In the short-term, her image could be perhaps damaged by the recent terrorist attacks which will be naturally connected to her “open-door” policy vis-à-vis the refugees in the German political, media and public debate. In the medium term though, it is expected that German citizens will renew their trust in the Chancellor who remains a sober politician guaranteeing calmness, safety, certainty and security not only in Germany but also in Europe.