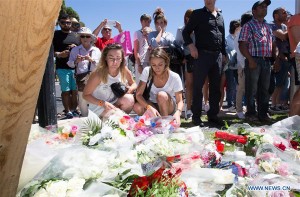 This time it was Nice. During celebrations for the French National Day in the cosmopolitan Promenade des Anglais, 31-year-old truck driver and perpetrator Mohamad Lahouaiej Bouhel had other plans and implemented his mass killing instinct. Embracing the outrageous ideas of terrorism he decided to spread pain, sadness and terror to victims, and critically injured people and their families, ordinary pedestrians and the international community.

In Europe, Paris and Brussels had been hit only a few months before Nice. Other cities of the world, including Istanbul, also were targets lately. Cynically, news about terrorist attacks tends to be now routinized in the media discourse. Wishes for the avoidance of similar terror acts in the future are not sufficient. The Nice atrocity will hardly be the last one as the recent history outlines. It is better to be prepared for the worse than to prefer the convenient way of self-delusion.

There is a common denominator in the perception of most analysts following the Nice drama. In their view of the majority, France is frequently under attack for two main reasons. The first is that its ideals represented in its national motto – liberté, égalité, fraternité – are an anathema to extremists. And the second is that the country’s secularism largely influences living conditions of Muslims. The ban of the burka is a characteristic example in that regard as it increases tensions and can alienate Muslim communities.

Nevertheless, an orthodox and rational analysis does not always provide an efficient explanation for the rise of terrorism in the modern era. That is because terrorism itself is not an orthodox and rational phenomenon, which can be easily interpreted. The ones who are involved in terrorist attacks do normally have a deeper cause they possibly believe they are serving by killing innocent citizens. Obviously, this is related to the traditionally interventionist character of French foreign policy in the Middle East and Africa. The man responsible for the Nice massacre was a terrorist of French-Tunisian origin. Is it a coincidence that Tunisia is one of the countries providing the Islamic State with fighters in Africa? This question needs to be carefully answered noting that France is in war with the Islamic State.

Additionally, the role of the police and the intelligence services should be examined. Although France was in a state of emergency on the night of July 14, it seems that police officers had not been particularly efficient in blocking the access of heavy cars and trucks to gathered people along the Promanade des Anglais. Although their job had been excellent during the “EURO 2016,” a momentary weakness can cause tragedy. Terrorists do not strike when expected. They are looking for appropriated opportunities and they surprise authorities.

As far as the role of intelligence services is concerned, the specific background of Mohamad Lahouaiej Bouhel needs to generate serious concern. The terrorist had been known to the French police for common law crimes such as theft and violence. But it seems that he later became radicalized, endorsing the methods of the Islamic State and practically applying them. Does this mean that intelligence services need now to reconsider their dogma and also pay attention to persons who do not – at first glance – give the impression of being extremely dangerous? The answer is rather positive, at least in specific cases. Although such a reorientation will be difficult, time-consuming and expensive, it could be a remedy to the Islamic State strategy, locating its extreme supporters at grassroots level.

All in all, the Nice attack demonstrates that terrorists – inter alia members of the Islamic State – are able to invent every possible means to spread chaos among innocent citizens. While the Islamic State is being militarily defeated in Africa and the Middle East by an international coalition, it takes revenge by organizing terror acts in various parts of the world. The will of retaliating cannot be easily prevented, even if intelligence services increase their level of cooperation among different countries. The historical record of Palestinian attacks against Israel is not encouraging. By contrast, it shows that terrorists can emerge as Lernaean Hydra heads.

For the coming months – if not years – Europe will have maybe to live with the nightmare of terrorism being a Damoclean sword.