China.org.cn deals with rapprochement between Turkey and Russia 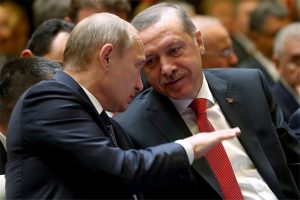 Presidents Tayip Erdogan and Vladimir Putin are two of the most charismatic and capable politicians on the world stage, in the 21st century. Whether someone agrees or disagrees with their policies, their statecraft and leadership is unquestionable. The personality of Erdogan and Putin is so strong that it can often overshadow the harmonious course of relations between their own countries. This is what happened in November 2015 after a Russian Su-24 was shot down by Turkish F-16s. Following this incident and for a period of approximately seven months, the two leaders had interrupted their personal contact and communication, being highly influenced by personal egoism.

During the crisis period, several analysts had tended to interpret international developments often assuming that this Turkish-Russian misunderstanding could be of a rather permanent nature. However, Erdogan and Putin proved them wrong and finally overcame the problem. The beginning of a new chapter in the bilateral relationship of the two countries was marked during the recent official visit of the former to St. Petersburg, where he held a critical meeting with the latter. Obviously, this meeting could hardly take place without difficult backstage diplomatic negotiations – with the help of Kazakhstan – facilitating the writing of an apology letter from the Turkish president to his Russian counterpart at the end of June.

At first glance, Erdogan had serious cause to pursue a rapprochement with his “friend” – as he says in media interviews – Putin. The impact of the economic embargo imposed on his country by Moscow had catastrophic consequences for the national economy of Turkey. The arrival of Russian tourists in Turkey, for instance, showed a decline of over 90 percent during some months of 2016 as opposed to the same period in 2015. Additionally, exports of Turkish products to Russia were diminished causing serious losses for companies, for example, in the food industry.

Putin is well aware of the motivations behind Erdogan’s new policy towards Russia. This gives him the upper hand in driving the bilateral relationship towards the future, although his country will also economically benefit by the rapprochement. Having the upper hand entails that the Russian president is now able to add a strategic dimension to discussions and possibly have more chances to boost his position on three important fronts.

The first is the construction of a new pipeline transporting gas from Russia to Turkey, the so-called “Turkish Stream”, which had been abandoned for months. The second is the avoidance of a new bilateral military crisis in Syria. And the third is the forging of a new position by Turkey within the North Atlantic Treaty Organization that will prevent bilateral conflicts and will guarantee the access of Russian military ships to the Mediterranean via Turkey. As far as this third objective is concerned, Tsar Nicholas I had adopted a similar strategy in 1853, which is almost being endorsed by Putin more than 150 years later.

Apart from Putin’s political advantage, both leaders are now able to play the card of their rapprochement in order to create high concern in the West. It is not a coincidence that American and European research organizations have launched online debates on what the potential “Turkish-Russian axis” might signal. The United States and the European Union regard Erdogan and Putin negatively, do not have detailed information about their collaboration and do not want to be subsequently encountered with new unexpected developments in a period of turmoil in world politics.

But the possibility for the gradual shaping of a “Turkish-Russian axis” certainly has some limits. Although the co-operation between Ankara and Moscow can be synthesized around economic issues, trade and energy affairs, it can hardly lead to a strategic rethinking. After 1984, relations between Turkey and the then Soviet Union had been seriously affected by their contradicting foreign policies in the framework of the Cold War. Bilateral relations have improved since the fall of the Berlin Wall in 1989 but the participation of Turkey in the North Atlantic Treaty Organization remains the most important barrier.

It will be very difficult for Erdogan to abandon the traditional course of Turkish foreign policy since 1952 and risk a practical break-up in its relationship with the West. Unpredictable as he is, he seems to be a realist in recent weeks endeavoring to avoid international isolation. The rapprochement with Russia is part of a multidimensional strategy which also includes steps for the improvement of relations with Israel and partly Egypt.

Last but not least, Erdogan is vocal in criticizing the United States and the European Union at the communication level but he steadily finds ways of political collaboration to serve his national interests.