China.org.cn discusses the impact of China’s policy on the UN 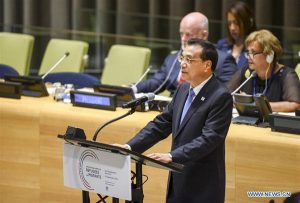 China’s opening-up to the world has been a significant national strategy in recent years. Aspects and the results of this strategy become apparent every time a Chinese leader participates in international organisations or pays an official visit to foreign countries.

Primer Minister Li Keqiang’s attendance at the 71st UN General Assembly, in parallel with his visits to Canada and Cuba, is no exception. His presence in New York, in particular, has revitalised the debate about China’s UN policy.

One year after the historical speech made by President Xi Jinping on the occasion of the 70th anniversary of the UN, Li has picked up the baton to confirm Beijing’s interest in becoming more actively involved in the world body.

As far as financing peacekeeping operations is concerned, China is the second largest contributor for 2016 with 10.26 percent of the total funding, following the 28.57 percent of the United States. Relevant resolutions of the General Assembly demonstrate that percentages will not change much in 2017 and 2018.

All this suggests that China is seeking to be a globally responsible actor and even operate in challenging environments. Although this year marks the 45th anniversary of the country’s return to the UN, it started to endorse UN peacekeeping operations since the late 1980s. Subsequently, in 1992, it sent its first company of engineers to Cambodia.

Now, 24 years later, Beijing’s traditional suspicion and hesitation have completely disappeared, as it participates in several missions, including MINURSO in Western Sahara, MONUSCO in the Democratic Republic of Congo, UNIFIL in Lebanon and UNTSO in the wider Middle East region.

However, China’s involvement at the UN level is not only confined to peacekeeping missions. While it regards the Security Council as the primary organ of international peace and security, it seeks a modest reform on the basis of ongoing international developments. In particular, it seeks a restructuring of world governance – including a potential new shape of the Security Council – which will reflect the growing economic power of developing countries.

A better geographical distribution is also proposed whereby different countries and civilizations, for example African states as well as North and South American ones, will have a greater say. The process is certainly not an easy one due to existing contradictory views. Above all, it requires exhaustive deliberations among different countries and a wide consensus on Beijing’s aspirations.

Going further, China places particular emphasis on the implementation of economic goals set by the UN. Therefore, it is endeavoring to promote the 2030 Agenda for Sustainable Development.

Premier Li’s decision to chair a relevant symposium on the margins of the General Assembly marks China’s determination to further support UN work just two weeks after the successful G20 Summit in Hangzhou. The principle of international cooperation is the necessary pre-requisite and the “New Normal” remains the principal priority.

All in all, China’s approach to the UN goes beyond abstract future plans, which often are not of interest to public opinion but only for the elite. In particular, it is working in practical ways to work against inequality in order to eliminate poverty.

In collaboration with the UN Development Program (UNDP) the Chinese government is in the process of improving the quality of life of its citizens. Having already lifted more than 500 million people out of extreme poverty over the last three decades, it looks towards the future by either applying relocation schemes from rural areas to city centers or by allocating more financial resources at the local level.

China is still a developing country with 70 million people living under the poverty line, especially in its central and western areas. Its continuous success in creating a better perspective for them will serve its own humanitarian goals and will highlight its commitment to UN ideals.