China.org.cn poses question whether the European dream has come to an end 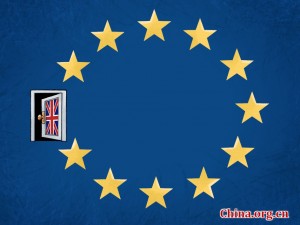 It is no longer a nightmare for the EU but a reality. Citizens of one of its most powerful member-states — the U.K. — have decided to leave it. In spite of warnings by political and business elites and within a bizarre public atmosphere following the killing of Labor MP Jo Cox, a 51.9 percent of the British population sent a clear message to London and Brussels. This is that the future of the U.K. should be outside Europe and that the country’s EU-membership since 1973 has to terminate soon.

Dramatic developments have followed the official announcement of the result. Prime Minister David Cameron decided to resign after unsuccessfully campaigning in favor or “Bremain.” Leader of the Labor party Jeremy Corbyn is also under pressure by his MPs for failing to passionately support UK’s stay in the EU in previous months. Further to this, world markets nervously reacted because the “Brexit” vote had not been largely anticipated while the pound sterling fell to three decades low.

However, short-term political and economic developments can be less significant in comparison to the ones the referendum result will possibly bring in the medium and long-term. Both the U.K. and the EU are entering uncharted waters. The process to be followed is unclear. In theory, the U.K. should almost immediately make use of Article 50 of the Lisbon Treaty and commence withdrawal negotiations. Such a scenario depends on two main parameters. The first is the alleged determination of both David Cameron and leader of “Brexit” campaign Boris Johnson to proceed. Both politicians prefer to delay the process and gain time in order to informally negotiate with Brussels. And the second is the unknown stance of the U.K. Parliament, noting that the majority of British MPs support their country’s EU membership. Although the will of citizens has to be somehow respected, the referendum is advisory and not mandatory.

From its part, the EU faces a serious dilemma. It either has to show flexibility vis-à-vis the U.K. in order to guarantee a smooth period for the post-referendum era, safeguard its economic interests and maybe allow a renegotiation or it needs to remain adamant to rules without any delay. Brussels is officially committed to the latter option. This stance is reflected in the joint statement published by top EU politicians Donald Tusk, Martin Schulz, Mark Rutte, and Jean-Claude Juncker. It is also mirrored in comments made by German Finance Minister Wolfgang Schäuble.

The unknown adventure for the U.K. and the EU does not stop here. To start with, a question of unity is raised in the U.K. The regional breakdown of the vote confirms that London, Scotland and Northern Ireland were practically Europhiles as opposed to other regions of the country. The division cannot be easily restored. Scotland, for instance, sees its future as member of the EU. In order to preserve this right its First Minister Nicola Sturgeon considers the possibility of a new independence referendum high. The aim for Scotland will be to declare its independence and then apply for an EU membership. This did not happen in the Scottish referendum of September 2014 but – at that time – conditions had been completely different and the U.K. was a member of the EU.

The pressure is even higher for Europe. The aftermath of the “Brexit” vote creates a similar appetite in several countries where Eurosceptic voices are loudly heard, even if reasons are different from the U.K. France is acn obvious example in view of the presidential election of May 2017 and the continuous rise of “Front National” party. Italy is another one as “Five Star” movement has called for a euro-referendum. The anti-EU feeling can be also easily spread through Scandinavia. More importantly, Europe is gradually becoming self-trapped by one of its fundamental principles: democracy. Many Europeans who vote in elections or referenda express their disenchantment with EU policies in a period of austerity and fiscal consolidation.

Leading European politicians, including German Chancellor Angela Merkel, express their optimism that the Union of 27 now member-states will continue despite Brexit. Nonetheless, words are not sufficient. The narrative of Europe needs to change. Its historical contribution to peace is unquestionable but not enough to persuade the young generation of Europeans who experience the pain of unemployment, low salaries and insecurity.

As long as the EU remains an affair of the cognoscenti and ignores concerns of ordinary people, more exits might follow, having different prefixes in the place of “Br.” Sadly, this can arguably entail the end of the most successful integration pattern in world’s history.