China.org.cn refers to the conference co-organised by PCCI and CIFE 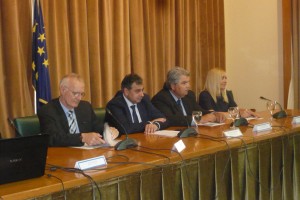 The successful presence of COSCO in the Port of Piraeus and positive perspectives for the future following the privatization of the Piraeus Port Authority are of high significance for Greece. This is not only outlined at the highest political level – as it was during the official visit of Greek Prime Minister Alexis Tsipras to China – but also in terms of business and people-to-people exchange.

A recent conference co-organized by the Piraeus Chamber of Commerce and Industry and the Centre International de Formation Européenne (CIFE) under the support of chinaandgreece.com, gave an excellent opportunity to publicly discuss how the port is becoming a hub in the Mediterranean and increasing the geopolitical significance of Greece. The theme of the conference was “Piraeus and New Growth Opportunities for Greece.”

H.E. Gao Wenqi, counselor and deputy head of mission at the Embassy of China in Greece was one of the keynote speakers at the event concentrating on the will of Beijing to further invest in Greece and contribute to the so-called “Grecovery.” In his view, COSCO’s expanded role in Piraeus will bring “win-win” results because it economically and strategically helps Greece and also facilitates the implementation of the “Belt and Road” policy. A lecturer at the European Institute in Nice and the founder of chinaandgreece.com endorsed these views and placed the critical improvement of Sino-Greek relations in the framework of Sino-European relations and the “2020 Agenda of Cooperation.”

There is no doubt that the transformation of the Piraeus port into an important transshipment hub due to COSCO’s investments is not a bilateral Sino-Greek issue per se. By contrast, it affects many other countries from all over the world which can similarly benefit. It is not a coincidence that the main conclusion of the conference was that “Piraeus can link China and Latin America” as President of the Piraeus Chamber of Commerce and Industry Vassilis Korkidis publicly said in interviews to the Greek media.

Ambassadors of several Latin American countries in Greece also focused on this dimension and discussed new opportunities for investments either via Piraeus or in their own countries. Relevant remarks were made by H.E. Mr. Tarcisio Navarrete-Montes de Oca, ambassador of ‪‎Mexico, H.E. Mr. Jorge Roman Morey, ambassador of ‪Peru, H.E. Ms. Maria Pia Busta, ambassador of Chile, H.E. Ms. Adriana Lissidini, ambassador of ‪Uruguay and H.E. Ms. Carolina Pérez Colman, ambassador of Argentina, who gave brief speeches at the conference.

The conference of July 18 on “Piraeus and New Growth Opportunities for Greece” was attended by politicians, diplomats, businessmen and scholars and took place in the context of a summer school with Chinese students from Chinese academic institutions, which is currently being organized by CIFE in Athens and the island of Spetses. Chinese students had the opportunity to gain a first-hand experience regarding the transformation of the Piraeus port and COSCO’s catalytic contribution to it.

This article was published on china.org.cn