China, Russia and the bombardments in Syria 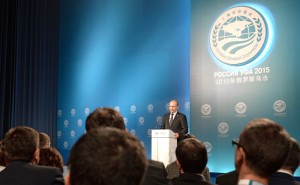 Dr Christina Lin, who has been interviewed by chinaandgreece.com on China and the Islamic State, did recently publish a new report on the Russian military intervention in Syria that may possibly be reinforced by additional troops from the Shanghai Cooperation Organization (SCO). This report was published on the website of The Institute for Strategic, Political, Security and Economic Consultancy (ISPSW).

This report explains that Russian military intervention in Syria may possibly be reinforced by additional troops from SCO member states. In the July summit of the China-led Shanghai Cooperation Organization (SCO), the two core missions were admitting India and Pakistan as full members and countering ISIS and Islamic extremism within member territories. Now that India and Pakistan have joined the SCO, the Eurasian bloc can focus on countering ISIS and other extremist bases in Syria and Iraq. With the recent Chinese Uyghur terrorist group Turkistan Islamic Party’s (TIP) capture of a Syrian airbase and access to MIG fighter jets and other advanced weaponry, China especially may be compelled to deploy troops to stop TIP from launching further attacks on the Chinese homeland.