China and the US presidential election 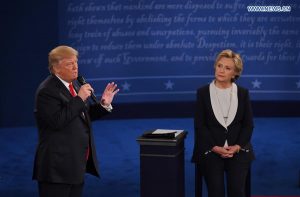 The US presidential election is always of high interest to China. And with it growing politically and economically this interest acquires a new dimension – the candidates’ views cannot be seen as distant or abstract policy agendas. In fact, their content and meaning could be rather practical, with direct or indirect impact on the country. Beijing is well aware of the often exaggerated tone emerging in the pre-election campaign and the checks and balances provided in American politics, but still wants to see how the arguments of Donald Trump and Hillary Clinton are evolving.

To start with, there is a fundamental difference between the two candidates. On the one hand, Trump represents what could be called an “unknown factor” in international relations. His lack of experience in dealing with world affairs in parallel with his emotional character makes it particularly difficult to predict how he might shape his possible presidency. On the other hand, Clinton, an establishment politician, guarantees continuity in US foreign policy as her general agenda is highly similar to that of President Barack Obama. Being the wife of former President Bill Clinton and having served as Secretary of State from 2009 to 2013 she can hardly surprise the international community.

With reference to China both Trump and Clinton seem first to pay attention to economic policies. Both are vocal in their criticism and are keen – as they say – on defending the American economy and protecting American jobs. While Clinton is more general in her remarks about “Chinese steel dumping,” Trump seems to cut his country’s trade deficit through new measures, perhaps including taxes on imports of cheap Chinese products and instituting more trade cases against China, both in the US and through the World Trade Organization (WTO).

Nevertheless, although the economic criticism on China might have some resonance with the American electorate, Trump might not find it easy to bring back manufacturing jobs from China to the US and force American businessmen to reconsider their economic plans. Further to this, he has said in his foreign policy speech that “we desire to live peacefully and in friendship with China,” so will hardly risk a deterioration of the bilateral relationship in an era of economic interdependence.

Also, Trump’s alleged labeling of China a “currency manipulator” has been exaggerated. Even leading American scholars, including Fred Bergsten, founding director of the Peterson Institute for International Economics, do not agree with such charges. Moreover, it is interesting that both Trump and Clinton will perhaps reconsider American trade policy vis-à-vis Asia by opposing the Trans-Pacific Partnership (TPP). The Republican candidate was highly critical from the start, while his Democratic rival is now skeptical despite initial support. If TPP does not pass in the lame duck session of Congress after the presidential election next month, the stance of Trump and Clinton will be a windfall for China constituting a serious blow for Washington’s policy of a pivot towards Asia.

In foreign policy generally, both candidates have talked tough on China during the pre-election campaign. The Republican nominee said he would bolster the US military presence in the South China Sea, yet he has refrained from reiterating Washington’s support for its traditional allies, Japan and South Korea. In contrast, Clinton’s thinking enjoys strategic depth. She – along with Obama – is the architect of the US turn towards Asia in recent years as laid out in her Foreign Policy article “America’s Pacific Century.” It is expected she will push for the deployment of the Terminal High Altitude Area Defense (THAAD) missile system in South Korea and will closely collaborate with Japan. As far as the South China Sea is concerned she welcomed the July Arbitration Court decision but it’s unclear if she will increase the US military presence and risk a direct confrontation with China.

So far Washington has failed to pressure Beijing to back away and the Democratic nominee will have to acknowledge this reality. In that regard, a recent Financial Times article portraying Clinton as “the China hawk,” is somewhat dubious. A reader of Clinton’s personal account “Living History,” published in 2003, will find her views on China are highly shaped by the so-called liberal institutionalism theory in the West. Nevertheless, she thinks Sino-American differences “can be bridged only through direct experience and relationships.” This creates some optimism and goes hand in hand with Trump’s willingness to seek common ground based on shared interest with Beijing.

All in all, China is not involved in the US presidential election campaign nor has it any preference over a candidate. Irrespective of the November result, peaceful development will remain its basic priority no matter who wins.