How will China read Europe after Macron’s victory? 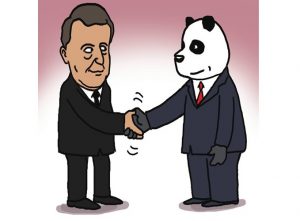 Emmanuel Macron was elected the next president of France Sunday. The centrist politician won in the second round over far-right politician Marine Le Pen in a run-off similar to a referendum on whether France will stay in the eurozone and possibly, in the EU. The result was expected because the majority of French people do not want to see the European tradition and orientation of their country in jeopardy. Nevertheless, the support for the Front National leader, especially in the final round, reflects the existing frustration and disenchantment in society, which perhaps will be a prominent issue in the future, if the new president’s performance is poor.

It was not particularly difficult for Macron to win the French presidential election. The damage to mainstream political parties due to the involvement of François Fillion in a scandal and the failure of François Hollande to live up to the promises he made in 2012 almost automatically made Macron the favorite to pass through to the final round. And Le Pen’s views and policies led to a rallying of political forces in France to prevent an extreme politician to come into power.  To put it bluntly, Macron won the election not because most citizens trust him but because he is viewed as the antidote to the rise of the far-right. So, as opposed to his pre-election efforts, the post-election mission will be much more challenging for Macron.

In parallel with this, Macron, who seeks to refute claims that he will be a second Hollande, will immediately need to respond to economic and social challenges. Despite his lack of governing experience, almost no grace period can be given in a country with more than 3.5 million people out of work. The EU’s strategic decision to frame Macron’s victory as a clear indicator of support for its values and policies does not entail success.

As far as China is concerned, it is looking at the internal developments in France without becoming involved in the latter’s affairs. In the previous months, Macron and Le Pen did not emphasize on the Sino-French relations. The new president, however, has said that China is an important ally to France and that he is prepared to work to preserve the high-level of collaboration between the two countries.  In addition, he has acknowledged the historical background of the bilateral partnership as well as Beijing’s critical role in dealing with international issues such as terrorism and climate change.

For her part, Le Pen has not made her position clear. She was a strong opponent to the recognition of China’s market economy status and made only two general references to China in her speech last February regarding foreign policy. She believes that “France should not make China a military opponent” and must “assure the continuation of the dialogue between regional powers to avoid a military escalation between China and the US.”

For Beijing, the victory of Macron means that continuity will drive Sino-French relations in the future. It does not need to activate a “plan B” policy as it has done for the UK following the Brexit referendum. And it does not have to be particularly cautious in its approach toward the new French president as it has done with Donald Trump since his inauguration. As a matter of principle, China prefers calmness and stability and dislikes sudden shifts and inconsistencies.

From another perspective, the EU will not risk the departure of another member. Macron advocates for intensified EU integration in such areas as the economy, social policy, immigration and security. That’s good news for Beijing, which certainly counts on the continuation of the European project for economic and political objectives in spite of serious disagreements between member states.

All in all, the victory of Macron signals the renewal of the Franco-German partnership as the driver of change in the EU, bringing more flexibility in its modus operandi. However, it will be very difficult for him to challenge Berlin’s superiority and especially that of German Chancellor Angela Merkel and Finance Minister Wolfgang Schäuble. This vindicates China’s strategy to approach the EU as an entity but also interpret it as being mainly led by Germany.