Should China worry about instability in the Balkans? 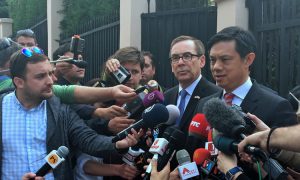 Source: US Embassy in FYROM

A few weeks ago in Brussels, President of the European Commission Jean-Claude Juncker warned U.S. Vice President Mike Pence of another war in the Western Balkans if the EU collapses. Juncker issued the warning in referring to Trump’s ignorant stance on the future of European integration and his support for Brexit. Although he exaggerated, there is no doubt the European dreams of the Western Balkans countries remain a long-term objective for national governments given a guarantee of relevant political stability and calm.

Internal divisions are apparent. More than two decades after the outbreak of the wars that split Yugoslavia, the trauma is still apparent in some countries struggling to achieve reconstruction and reconciliation.

Disagreements between Serbia and Kosovo following the declaration of independence of the latter, and ethnic tensions in Bosnia-Herzegovina are a usual phenomenon. International attention recently focused on the Balkans, however, due to the violent attacks in the parliament of the Former Yugoslav Republic of Macedonia (FYROM).

Specifically, while the country has not yet formed a coalition government after the snap election of last December, demonstrators and supporters of former Prime Minister Nikola Gruevski attacked several lawmakers after an ethnic Albanian deputy was elected speaker. Among the injured was Zoran Zaev, leader of the Social Democrats, the main opposition party.

The U.S. and the EU condemned the attacks. The former almost immediately decided to try and mediate and contribute to the finding of a political solution. Deputy Assistant Secretary of State Hoyt Brian Yee visited Skopje and urged prudence. Following his intervention, political leaders in FYROM seem to have realized the seriousness, although the crisis has not yet fully dissipated.

For its part, China cannot overlook the situation. Its interest does not only derive from its need to protect its diplomatic personnel and Chinese people living in FYROM, but also for the future course of Chinese investments in the country where several Chinese companies are active. Beijing-based Sinohydro, for instance, is engaged in projects for the construction of the highways from Miladinovci to Shtip and from Kichevo to Ohrid. China Railway Rolling Stock Corp. supplied FYROM with six passenger trains following a 2014 bilateral agreement. A supplementary agreement for the delivery of four electric locomotives was signed in January 2017.

Moreover, China International Water and Electric Corp. previously constructed Kozjak hydropower plant, and this successful model is useful to future energy projects. What is perhaps more important for China is that FYROM plays a key role for the implementation of the “Belt and Road” policy. Being the northern neighbor of Greece, it provides a handy passage to Serbia for commodities arriving at the port of Piraeus now completely controlled by COSCO. A research paper of the European Bank for Reconstruction and Development (EBRD) mentioned that China and FYROM have already agreed to prepare a feasibility study for the route and costs of railway modernization, prior to considering financial arrangements for the project. Beijing has already signed separate deals with Serbia and Hungary to construct and revamp the rail link between them.

Most commentators elaborating on the current crisis in FYROM tend to concentrate on ethnic tensions and the influence exerted on ethnic Albanians by Albanian Prime Minister Edi Rama. The nationalistic idea of a “Greater Albania” with the participation of the ethnic population from Albania, FYROM and Kosovo is a subsequent point of reference.

Nevertheless, more emphasis should be perhaps placed on the fatigue of citizens in seeing Gruevski as their country’s leader. As prime minister for 10 years, he is accused of corruption while the country is suffering high unemployment and poverty. For many years, he was spending a large fund for the cultivation of the national identity to avoid potential “Albanization.”

Last, but not least, his intransigent stance in negotiations with Greece under UN aegis with the purpose of finding a mutually-accepted solution for his country’s name has kept FYROM away from membership of the EU and NATO.

In these circumstances, China should certainly pay attention to internal developments in FYROM and hope for stability while avoiding endorsement of catastrophic theories about a civil war. A new government without Gruevski will sooner or later be formed and will lead the country towards a future with China, a critical international player. Zaev has expressed his commitment to closely collaborating with China in a recent meeting with new Ambassador Yin Lixian in Skopje. And ethnic Albanian politicians in FYROM are inspired by the excellent level of Sino-Albanian cooperation. Chinese Vice Premier Zhang Gaoli visited Tirana only three weeks ago confirming the traditional friendship between the two countries.

All in all, China might only be encountered with some delays in the implementation of some projects. However, experiences from the privatization of the Piraeus Port Authority suggest it can be patient.