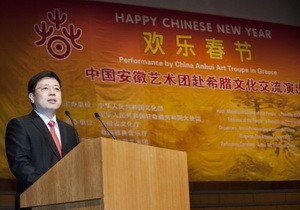 In order to celebrate Chinese New Year, the Embassy of China in Greece organised a reception at the Athens Megaron Hall on 27 January 2016.  The event included a performance by China Anhui Art Troupe. On this occasion, Ambassador of China Zou Xiaoli had the opportunity to discuss what the new ‘year of the monkey’ might bring for China and Greece. Ambassador Zou outlined the excellent momentum for the evolution of the bilateral relationship and expressed his optimism for fruitful results.

There are different areas where action and new initiatives could be expected in the next months. To start with, high level visits will take place, noting that this year marks the 10th anniversary of the establishment of comprehensive strategic partnership between China and Greece. Additionally, following the recent decision of the Greek Privatisation Fund to announce COSCO as the preferred bidder to buy the Piraeus Port Authority, Beijing and Athens plan to build the China-Europe Land-Sea Express Route to connect the maritime Silk Road with the Silk Road on land. Moreover, the Chinese Cultural Center will begin to operate in Athens and the Asia-Europe Scientific Innovation Conference will be also held in the Greek capital. Additionally, the two countries will increase cultural exchanges and more Chinese tourists will visit Greece. Last but not least, China and Greece will enhance coordination and cooperation in regional affairs to jointly deal with challenges.