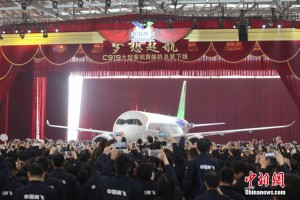 C919, China’s first homemade large passenger aircraft, was rolled out of the final assembly line in Shanghai on Monday 2 November 2015.The plane designed to have 158 seats and a standard flight range of 4,075 km was developed by Commercial Aircraft Corporation of China, Ltd. (COMAC). The C919 aircraft will make its maiden flight next year and then begin test flights for about three years before putting into commercial use. COMAC said it has won 517 orders from 21 customers home and abroad for the aircraft. President Xi Jinping expressed his congratulations to developers and called for careful preparation for a maiden flight.