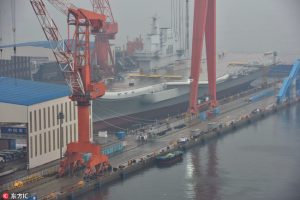 China’s first homemade aircraft carrier hit the water. The construction of the type 001A ship began in 2013 and almost finished four years later in the Dalian shipyard. This is the country’s second aircraft carrier following the acquisition of Liaoning which had been built in Ukraine. Although there is still a large amount of work to do at the carrier’s outfitting stage after its launching, the completion of the construction process is remarkable. China is also building its third carrier of the type 002 in Shanghai.

China’s interest in increasing its military strength goes hand-in-hand with President’s Xi Jinping commitment to empower his country and restructure its armed forces. Xi, also the Chairman of the Central Military Commission (CMC) has said that developing a strong army is crucial to the building of a world-leading military as well as to the CPC’s long-term stability. During a recent inspection he reiterated the importance of continuous reforms and the need of preparedness for combat.

China has gradually become a significant military spender. According to the Stockholm International Peace Research Institute (SIPRI) the world spent $1.69 trillion on the military in 2016. US military spending in 2016 was $611 billion – nearly 3 times as much as China’s military spending, which was the second highest in 2016 at $215 billion. They are followed by Russia, Saudi Arabia, India, France, UK, Japan and Germany. The US military spending is larger than the next 8 biggest military spenders combined. Additionally, President Donald Trump proposed this year a $54 billion increase in defense spending. China has also announced its plan to raise its defense budget by around 7 percent this year.

Some observers see an ongoing arms race between China and the US. But both sides are well-aware that a regional conflict could lead to a large-scale war and possibly to a mutual assured destruction. This said, deterrence is their ultimate goal theoretically. As far as China is concerned, the country seeks to avoid the risk of a war on the whole. Its stance on the North Korean issue outlines this policy. During a telephone conversation with his American counterpart, for instance, President Xi urged restraint and avoidance of actions that might exacerbate tensions.

This does mean of course that China will refrain from acting militarily should necessary. It is its right to protect its national interest, even if this interest contradicts that of the US as we see in the South China Sea. Apart from the future evolution of the Sino-American relationship in Asia, China is also considering an expanded international role. Its contribution to the fight against the Islamic State constitutes a characteristic example. Also, Chinese forces can provide a guarantee for the smooth development of the Belt and Road initiative and the protection of Chinese investments abroad.

Nevertheless, every reference to the rise of China’s military power should not only focus on its capacity but also on its technological innovation. This technological innovation is the key of upgrading, advancement and modernization. The construction of homegrown aircraft carriers could not have otherwise been achieved. International media have extensively focused on China’s military innovation. Time magazine has asserted that the country’s military upgrade is ‘natural for an incipient superpower’. And The New York Times has argued that its ‘intelligent weaponry gets smarter’.

Obviously, China’s emphasis on innovation is not exclusively interwoven into the military sector. By contrast it is a principal priority of the government in a period during which it is endeavoring to change its growth model and apply the so-called ‘New Normal’. On these grounds, ambitious projects are continuously being implemented. A few days ago, for example, China’s first domestically produced passenger plane – the C019 – successfully completed its fourth high-speed taxiing test, moving closer to its maiden flight. Additionally, space technology has produced impressive results such as the recent launch of Tianzhou-1, the first Chinese cargo spacecraft which was docked with the orbiting Tiangong-2. And the China Academy of Aerospace Aerodynamics (CAAA) is putting forward the concept of future unmanned aerial vehicle (UAV) warfare.

As a rising political and economic power China is laying stable foundations for its future development. Both the strengthening of its military and the promotion of technological innovation – via scientific research – are critical parameters in that regard.