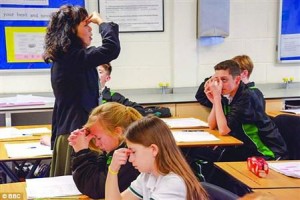 A recent documentary produced by the British Broadcasting Corporation has caused a stir in China and in the UK. The documentary, featuring Chinese teaching practices and discipline techniques used on British students, is making people take a hard look at Chinese education methods. The new series, titled ‘Are Our Kids Tough Enough? Chinese School’ revolves around five Chinese teachers who are sent to teach 50 UK teens at a school in Hampshire.The teachers instruct the students for a month. The pupils are then tested, and the results are compared to those of their peers who have continued in the regular UK education system. The idea is to see if the Chinese method improves academic performance.

The Chinese teachers used their own teaching ways but received strong resistance from the students. A clip from the documentary, circulating online, shows some problems, with Chinese teachers calling their students ‘lazy’ and lacking in discipline, while the students say the high pressure and harsh teachers are driving them crazy.This has spawned a new debate in both China and the UK, with some arguing the teenagers need more restraint and regulation.

Others say Chinese methods encourage rote learning instead of independent thinking. ‘For instance, Chinese language teachers should do more than pass on knowledge about words and characters. They should inspire students, helping them feel the sentiment from Chinese literature. This is a higher level of teaching.’

Yang Dongping, Dean of the 21st Century Education Research Institute, says the divergence is actually a function of totally different cultural backgrounds. ‘The Chinese teaching method is designed to strictly train the majority. Foreign teaching methods, however, are more natural and relaxing, designed to inspire students’ interest in learning. Education methods are based on culture. That is why a successful education method in one place may not work that well when simply “transplanted” into another place.’

Some Chinese teachers documented in the film say they think the British students don’t have that high competition pressure like Chinese kids since their country provides high social welfare.Returning to China, Li Aiyun, one of the featured teachers, reveals that after getting used to the Chinese way of learning, their students actually get along with them quite well and achieved great scores in the final tests.

Yang Dongping from the 21st Century Education Research Institute says the documentary does reflect some problems rooted in traditional Chinese teaching methods. ‘Nobel-laureate physician Yang Zhenning used to give a very fair comment on this issue. He says the Chinese-style education method works for most ordinary qualified students effectively, helping them reach high level standards. However, it may compromise the training for high-potential outstanding students.’ The expert notes China has started to pay more attention to helping students learn with joy. However, the exam-oriented education system still needs to be improved.