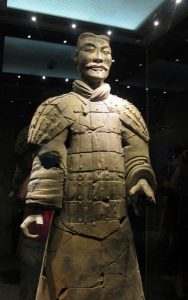 A Chinese archeology expert has refuted the view of a BBC report that Terracotta Warriors were inspired by ancient Greek sculpture, slamming it as a deliberate “exaggeration to gain influence.” “A group of archaeologists working on the tomb of Emperor Qin (259-210 BC) are dishonest with their research and always take things they imagine as fact,” Ni Fangliu, a Nanjing-based archeology expert, told the Global Times.

The BBC report said the inspiration for the Terracotta Warriors, found at the Tomb of the First Emperor near today’s Xi’an, may have come from ancient Greece, quoting Li Xiuzhen, an archaeologist from Emperor Qin Shi Huang’s Mausoleum Site Museum. Li said that “we now think the Terracotta Army, the Acrobats and the bronze sculptures found on the site have been inspired by ancient Greek sculpture and art,” which is an evidence of close contact between the First Emperor’s China and the West before the formal opening of the Silk Road.

But Ni refuted the claim, noting, “The Records of the Grand Historian provides detailed written account of the building process of Qin’s tomb including the design of all the entombed articles in the underground palace, and doesn’t mention any Western contacts with China,” said Ni. The Records of the Grand Historian, a monumental Chinese work covering the ancient Chinese and world history, was finished by 94 BC by Sima Qian, an official from the Han Dynasty. Ni said that the pre-Qin culture was one of the most advanced cultures of that time, referring to Venus de Milo, one of the most famous works of ancient Greek sculpture created between 130 and 100 BC, being similar to two earlier female statues found on the site of Hongshan Culture, a Neolithic culture in Northeastern China.

Two renowned ancient civilizations have their own special features, thus there is no basis to say the artistic work of one was inspired by another civilization because of similarities, Ni said.