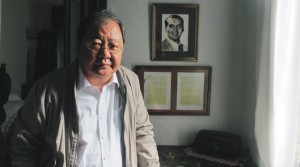 Chinese poet Jidi Majia visited Greece to participate in a debate which will take place at the Athens Concert Hall. The event was organised in co-operation with the ‘Circle of Poets‘ and the Embassy of China in Greece on Thursday 10 March 2016, at 19:00. Jidi Majia’s poems have been translated in several languages including English, French, German, Spanish and Polish.