The Chinese view of the Greek election 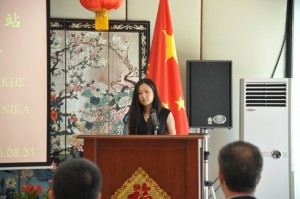 Following the Greek election of 20 September 2015 Deputy Editor of China Greece Times Lydia Liang outlines the Chinese perspective on chinaandgreece.com. Among other things, Ms Liang expresses her view on the future of Sino-Greek relations as well as on the recent sale of the of Kumport Terminal in the Port of Ambarli in Turkey to a Chinese consortium.

How do you assess the election result?

The election result is what I expected because most of the parties stand by the new bailout deal, including left-wing Syriza. Meanwhile Mr Tsipras has no strong competition while many Greek people think that there is no better choice. In my view this is the normal result.

Do you think Sino-Greek relations will now improve?

The victory of Syriza is good for the continuation of policies which had been followed by the previous government, including the privatization of Piraeus Port Authority. According to the experience of the last 7 months,  the Greek government led by Mr Tsipras was on the whole friendly to China and supportive to the Chinese enterprises. I expect Sino-Greek relations will be further promoted.

What does it mean that COSCO has also decided to invest in Turkey?

This investment in a Turkish port could be considered as a strategic decision in the Balkan Region in the context of the Silk Road Economic Belt and the 21st-Century Maritime Silk Road. TAIPED said that it is pleased to see that COSCO agreed to invest in Turkish largest private port at a very good price. This would be a good reference for the privatization of Piraeus Port Authority.