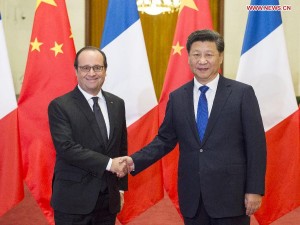 French President François Hollande made a two-day official visit in Beijing on 2 and 3 November 2015. Economy and climate change were the main issues on the agenda. Hollande was accompanied by approximately 40 heads of French firms and a number of ministers, visiting a Sino-French water treatment company in Chongqing  to highlight co-operation in green growth industries. France and China signed a memorandum of understanding for possible partnership on nuclear-waste recycling that could be worth €20 billion. Holland met with Chinese President Xi Jinping and also ended his visit by addressing a Chinese-French business forum on the economy and climate and had talks with Chinese Prime Minister Li Keqiang and the head of the Chinese parliament.

Climate change was the other important issue on the agenda between the two sides. Hollande was in China to try and persuade Beijing, a key player in the fight against global warming, to give a decisive push to negotiations ahead of a key climate conference in Paris. ‘The support of China is essential,’ he said, adding: ‘The fight against global warming is a humanitarian issue – how the planet can be preserved – and it is also an issue of considerable economic importance, of what we call green growth.’

Before their leaders’ visits to China, the French and German ambassadors to China jointly published an article in People’s Daily, stating that, ‘Today’s action for the climate is key to our common future. France and Germany firmly believe that the world must develop a sustainable way, green and low-carbon.’ Chinese negotiators say the Paris agreement’s general frame is finished and lays out a good foundation for further negotiation. As a representative of developing countries, China plans to launch its national carbon trading system in 2017.

Besides climate change and investments, agriculture and tourism were also discussed.