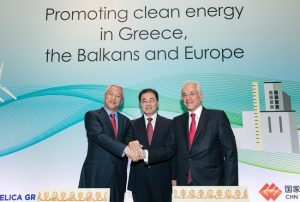 On 5 July 2018, the Chinese Company CHINA ENERGY INVESTMENT CORPORATION Ltd, the largest energy producer of the world, not only from conventional sources but also from renewables, and the largest oil by coal producer in the world, and COPELOUZOS GROUP, one of the largest investment groups in Greece with a diversified range of activities such as energy and infrastructure, announced the commencement of their strategic cooperation. This cooperation refers to the entrance of CHINA ENERGY into the equity of a significant pipeline of wind farms constructed by COPELOUZOS GROUP and the joint submission of expression of interest for lignite units of PPC, which marks the beginning of their cooperation also in Conventional Power Plants.

The cooperation between the two Groups, both in the green energy sector and the environmental upgrading energy generating units, aims to expand in the Balkans as well as in other European countries.

Mr. Dimitris Copelouzos, President and CEO of Copelouzos Group stated: “Our Group believes in clean energy and the prospects of Greece. Our partnership with CHINA ENERGY is excellent and is based on the seriousness, reliability and consistency of both sides. We are confident that this cooperation will act as a catalyst for the completion of major investment and promote the energy industry of Greece, in addition to the development of cooperation between Greek and Chinese companies in many sectors of the economy. ”