Cultural links between China and Greece existed in the late Antiquity

New research findings show that Western explorers settled in China more than 1500 years earlier than experts had believed. In particular,  archeologists have reached this conclusion after finding that the famous Terracotta Warriors might have been made with the help of the Greeks. Researchers from European and Chinese Universities have participated in a project which has been largely discussed in international media in recent weeks including BBC, The Guardian and The Independent. As archaeologists reveal, the famed ‘Terracotta Warriors’ of the 1st Emperor of China and also other works of art reflect direct cultural exchanges between the ancient Greek and Chinese civilizations. Sculptures of the ‘Terracotta Warriors’ were discovered by Chinese farmers in 1974. 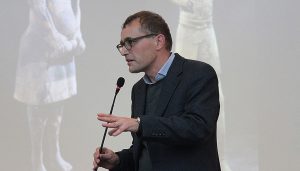 The website chinaandgreece.com approached Professor Lukas Nickel, chair of Asian Art History at the University of Vienna, who has shared interesting insights with us. According to this article ‘The First Emperor and the sculpture in China‘ published  in the Bulletin of the School of Oriental and African Studies,  ‘it is highly possible that there were cultural and trade exchanges between China and West in the late Antiquity, before the beginning of the Silk Road”. Archeologists in the Mausoleum of the 1st Emperor Dr Li Xiuzhen agrees with this view, mentioning that ‘Western objects and ideas had been channeled in the society of ancient China, producing very interesting cultural results’.

Moreover, according to Professor Nickel, ‘the Terracotta Warriors and other artistic works of the same period in China featured the critical effects for the Chinese sculpture by the ancient Greek sculpture. These effects according to the article, might come not only by the intervention of third parties but by direct contacts between Greek and Chinese artists. The Chinese carvers adopted elements of the style that was dominant in the Hellenistic Kingdoms of Asia. The indirect contact between the two civilizations has started possibly with the Alexander’s Great campaigns in Central Asia, and the dissemination of products of Greek culture in the Pamir mountains (today Tajikistan-Kyrgystan), which was traditionally considered as the western boundaries of the Chinese sphere of influence’. 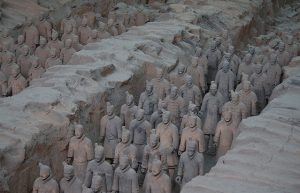 As time runs new evidence suggests that trade and cultural contacts between the East and the West in the Antiquity and the Middle Ages are much wider than the ones recorded in the course of  historiography. The civilisations of China, the Asian steppe, the Middle East and the Eastern Mediterranean seem to have developed networks of contact and exchange which created the cultural background of the region of Eurasia.