MEP Dimitrios Papadimoulis on chinaandgreece: ‘We do not seek only economic but also political co-operation with China’ 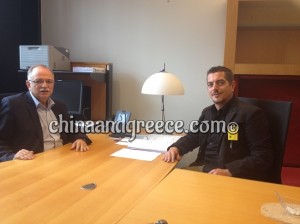 Mr Dimitrios Papadimoulis, MEP for a new 5-year term with SYRIZA, European Parliament vice-President and Substitute of the Delegation for relations with China, spoke to chinaandgreece from his Strasbourg office. Outlining Europe’s relations with China, Mr Papadimoulis estimates that they are growing and mutually beneficial, and that they can be further expanded in the future. As he asserted: ‘These relations should be developed not only at the economic level but also at the political one. Good political relations can contribute towards democratization’.

Mr Papadimoulis, however, focused on working conditions in China noting that despite the interdependence of global economy, ‘Europe has its own norms’. As he specifically explained: ‘Europe has comparative advantages in education and technology and should have higher salaries’.

In the view of Mr Papadimoulis, the European Union has ‘to invest in comparative advantages and develop economic relations with all regions of the world; not only with China but also with Russia’.  As he concluded in his interview with chinaandgreece: ‘We want Europe not to be afraid of its relationship with other countries but to develop balanced partnerships of mutual benefit’.

Share the post "MEP Dimitrios Papadimoulis on chinaandgreece: ‘We do not seek only economic but also political co-operation with China’"